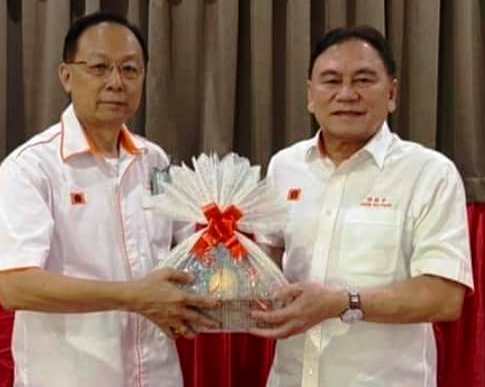 He said PN may be able to capture a certain number of parliamentary seats in the next general election.

Hence, he said local parties in Sabah and Sarawak should work with PN to prevent BN-Umno from getting too powerful.

“We must not allow Umno to achieve landslide victory in GE15 and regain dominance of the Federal Government.

“If that happens, the court cluster of Umno will be freed of all charges and even former prime minister Datuk Seri Najib Tun Razak may be released from prison.

“Sabah and Sarawak must work closely with PN to break into mainstream politics for Malaysia to have hope for a brighter future,” Chin said when officiating LDP Tanjong Kapor division conference here on Sunday.

“Ironically, Zahid even said that the people wanted a legitimate government that had the mandate of the people which was not formed through political manoeuvring.

“Did he mean to imply that the present BN-PN Government is illegitimate?”

He pointed out that BN dominated by Umno made the move to pact with PN in order to form a new government following the resignation of Tun Dr Mahathir Mohamad as prime minister during the Pakatan Harapan (PH) governance.

“Zahid’s claim that the government-of-the-day is illegitimate sounds like an admission that Umno and BN had seized Putrajaya through unscrupulous means,” he said.

Chin opined that Zahid’s push for snap polls is a desperate attempt to avoid facing the same fate as Najib, who is currently serving a 12-year sentence in Kajang Prison following the Federal Court’s decision on Aug 23 to uphold his corruption conviction involving RM42 million of SRC International funds.

Zahid is banking on Umno’s victory in the next general election for him and the court clusters of his party to escape the clutches of the law, he said.

He stressed that Ismail Sabri need not give in to the pressure of the court cluster to call for early election because the Federal Government has signed the Memorandum of Understanding (MoU) with PH on political transformation and stability so that the administration can focus on socio-economic development of the country.

“Hence, the Prime Minister should wait till the current electoral term expires in July next year to call for GE15.”

He added that the MoU had also enabled the passing of the anti-party hopping law with majority support in the Parliament.

“We should take advantage of the current momentum to push for more legal reform, such as enacting a law on political funding and reviewing the power of the Attorney-General (AG) as proposed by Ismail Sabri.

“The election can wait, at least until the bills are tabled and passed in the next Parliament sitting.”
In other words, he said the government must seize the opportunity to implement structural reform while the consensus between the ruling and opposition parties still exists.

Chin said the wild arrogance of Umno, in which its Umno Supreme Council leaders and members, including Datuk Seri Azalina Othman Said, who openly accused the court for its allegedly unfair judgment and even urged the Prime Minister to sack the judge and AG, was worrying.

“We cannot imagine how Malaysia will be if Umno once again reigns the country and regains its full political power.

“Umno even invited Najib’s legal counsel to Umno general assembly. These incidents showed the blatant disrespect by Umno towards the judicial system.

“The Umno leaders have nothing to be afraid of if they had done nothing wrong’.

He said the 1MDB scandal had cost Umno its 60-year reign on Malaysia.

He said Umno and BN may stand a chance to regain the people’s support if the party is willing to distance itself from its morally corrupt leaders and make way for reformation and new leaders to instill integrity in the party.

“Presently, the antics of Zahid and Umno leaders are abominable.

“Umno will never win back the people’s trust and support with Zahid at the helm. The only way to win for Umno is to field clean and responsible candidates in the next election.”

Chin said Umno and BN’s self-delusion led them to believe that they could win the election and form a new government on its own, never thinking that they would be under heavy attack by the opposition on the 1MDB issue.

“Najib’s conviction is beginning to convince people that our judiciary is capable of maintaining its integrity without being affected by political influences.

“The integrity of our judicial system where no one is above the law marks a new beginning for our country.”