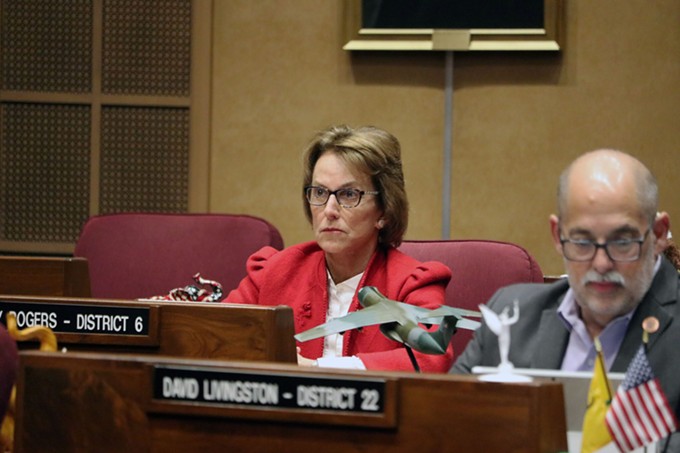 Rogers attended Fuentes’ America First Political Action Conference earlier this year via video. She gave a speech in which she fantasized about hanging political enemies and called those in attendance “patriots,” speaking shortly after others who shared nakedly white nationalist views on stage.

The Buffalo shooter was apparently heavily inspired by and plagiarized the manifesto of the 2019 New Zealand Christchurch mosque shooter who held deeply fascist beliefs and that the white race was being “replaced” by immigrants. Rogers herself has echoed this belief and defended it online.

​​Rogers in 2021 retweeted an article by far-right outlet Breitbart Texas about migrant apprehensions, along with the comment that “we are being replaced and invaded.” The language is the same used by those who promote the “Great Replacement Theory.” The manifesto of the Christchurch shooter was titled “The Great Replacement” and the theory is popular among extremist groups such as the American Identity Movement and Generation Identity.

It has also begun to find traction in mainstream Republican political discourse, and has been espoused by Fox News host Tucker Carlson.

The Buffalo shooter’s diary and manifesto released online and analyzed by extremist researchers shows that he meticulously planned his attack and sought to emulate the Christchurch shooter, seeking out areas with high Black populations.

“What is #MKUltra?” Rogers wrote. “A lot of things make sense when you understand that one.”

The CIA program that unsuccessfully attempted mind control has been at the forefront of conspiracy theories — some claim that celebrities are being controlled — and some conspiracy theorists have been claiming without evidence that the Buffalo shooter is a “victim” of the program. Users in Rogers’ comments quickly made the connection between her post and the shooting, as well.

Gov. Doug Ducey, whose political action committee spent $500,000 to get Rogers elected in 2020, previously said having Rogers in the legislature was better than electing a Democrat. Ducey’s office could not be reached for comment on whether he still shares that belief and whether he supports or condemns the “Great Replacement Theory.”

Republicans backed an investigation, but balked at expelling Rogers

The Senate voted 24-3 to approve an investigation by the Senate Ethics Committee. Democrats voted for the investigation, though some lamented that the committee has a habit of sweeping issues under the rug.

Sen. Martin Quezada said the Ethics Committee rarely takes investigations past the initial stages, and no members of the chamber are ever held accountable.

That sentiment was shared by Sen. Victoria Steele, who is one of two Democrats on the ethics panel. She swatted aside GOP claims that Rogers needed “due process,” noting that Rogers was previously censured and has already faced one ethics investigation, but has not improved her behavior.

“What happened over this weekend was not doing better. What happened over this weekend was an embarrassment to all of the good people who serve in this Senate – who have ever served in this body,” Steele said. “Spewing hate and furthering racist comments is not what we should be here for. My fear with this vote to move to the Ethics Committee is that it’s been my experience nothing happens — and this will be no different.”

Steele added that this vote is “too little too late,” but it was her only option at this point and she worries that everything will be prolonged to after the election where Rogers could likely win and be back in the chamber for a second term unscathed.

In a separate motion, Democrats sought to expel Rogers. Had it succeeded, it would have been only the fifth expulsion in state history; but with three senators absent, it was doomed to fail, and subsequently did on an 11-15 vote.

Rogers last year faced an ethics investigation only weeks into her freshman term, which was ultimately dismissed. Her colleagues also voted to censure her in March, after she spoke to Fuentes’ white nationalist conference. However, she was not censured for speaking to the group, calling for violence or a series of antisemitic social media postings in the run up the conference. Rather, the censure was because she threatened members of the Senate with retribution if they supported the censure.

Rogers celebrated the censure on her Telegram channel, sharing artwork created by a known white nationalist artist that declared her a “certified American Patriot.”

While Monday’s vote to investigate Rogers had overwhelming support, many Republicans who voted to launch the investigation said they didn’t know what Rogers had posted online or what it meant.  Similar reasoning was used to justify voting against immediately expelling her.

“It’s obnoxious,” Sen. Michelle Ugenti-Rita said of the motion to expel. “The voters can make a choice, the election is not far away.”

Sen. J.D. Mesnard said he was unaware of the controversy that had occurred involving Rogers and had arrived on the floor not knowing why it had started late, only to learn that they’d be voting to expel a member.

“This would be one of the most historic moments in the Senate’s history if we did this,” Mesnard said.

Recent examples of expulsions or resignations came as the result of monthslong ethics investigations – both of which happened in the state House of Representatives. Republican Rep. Don Shooter was expelled in 2018 after many women – including fellow lawmakers – came forward accusing him of sexual harassment. And Republican David Stringer resigned in 2019 after it was revealed he had sex with young boys decades earlier while living in Maryland.

Free speech, due process and no information

The only votes against the ethics investigation came from Rogers, Sen. Kelly Townsend and Sen. Warren Petersen. Townsend is running against Rogers in the Republican primary for District 7 after the pair were drawn into the same district during redistricting last year.

Petersen, on the other hand, said he was voting no for a lack of information on the entire situation. He was also one of three votes against Rogers’ censure in March –joining Rogers and Sen. Nancy Barto.

“I just walked on the floor. I hadn’t even heard what the tweet was or what was done and, Madame President, without seeing the tweet myself or understanding what this is … I don’t know that this is appropriate,” Petersen said.

Townsend said she disagreed with what Rogers said on social media, but that she still had a right to say them under the First Amendment. While the First Amendment gives people the right to free speech, it does not protect them from being held accountable for what is said, a point Townsend conceded while voting against the motion.

“I have to defend a person’s right to say ugly things,” Townsend said after noting that she’s in between a “rock and a hard place” for holding Rogers accountable for her speech. She added that she was embarrassed that Arizona was once again receiving national headlines for something that doesn’t paint the state in a positive light.

She said Rogers’ words minimized the pain of the families who are grieving in Buffalo, but she still voted no.

Townsend also has a history of making antisemitic comments, including comparing the COVID-19 pandemic to the Holocaust. Her past in far-right circles has been well-documented dating back to the early stages of the Tea Party.

Rogers did not speak on the Senate floor though she did send out a statement later in the evening blaming the “race-obsessed” media for taking her words out of context. Even though there was not any other context provided in her original social media posting.

Sen. Sean Bowie was the only Democrat who voted against the motion to expel Rogers, and he echoed his Republican colleagues by saying it was about due process. He did not speak on the floor, but told the Arizona Mirror afterward that he had only learned of the social media posts and motion to expel when he arrived on the floor.

Bowie voted for the March censure and voted to investigate Rogers’ comments, but said voting to expel without that necessary process “sets a bad precedent.”

When asked if speech could ever be bad enough to remove a member, Bowie said it depends on the content and the pattern, but that everyone needs that chance for due process even Rogers who he said both has the content and pattern of behavior.

Ultimately, he said the maneuver by his chamber today felt like politics, especially since expulsions need a two-thirds vote.