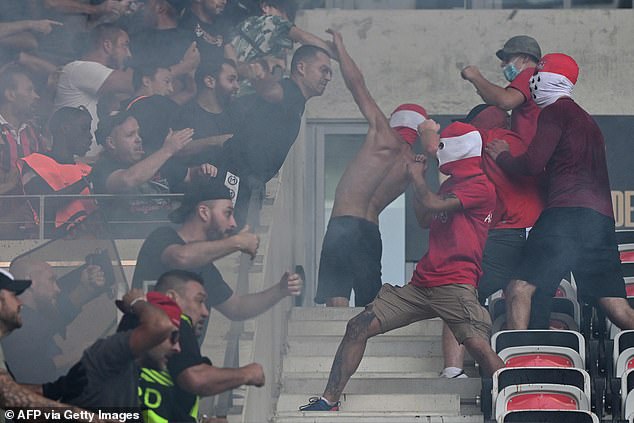 Europa Conference League clash between Nice and Cologne is delayed by almost an hour after chaos broke out in the stands with fans fighting, flares thrown across the stadium and one supporter even falling from the second tier

By David Wood for MailOnline

German side Cologne have announced that kick-off of Thursday’s Europa Conference League clash with Nice has been delayed due to violent clashes between rival fans at the Allianz Riviera stadium.

Footage on social media showed masked thugs fighting in the stadium and flares being thrown, with French outlet RMC Sport reporting that one supporter was seriously injured after falling from a stand.

Governing body UEFA said the match was ‘delayed due to crowd disturbance’.

They warned the match would be called off if there were any further incidents.

Around 15,000 Cologne fans had travelled to France for the match and taken over the main square in the city during the day.

It was similar to the scenes which marred Cologne’s Europa League match at Arsenal in 2017, when the kick of was delayed following crowd trouble.

Arsenal confirmed that the 8.05pm start would be put back an hour after Cologne supporters reportedly stormed the barriers at the north London stadium.

Once Cologne supporters were allowed into the ground a number of them clashed with stewards and Arsenal fans. Riot police soon moved in to stop any further outbreaks of trouble.

Reports over an hour before the game suggested that German fans were held back outside the stadium. They then broke past police lines and headed for the turnstiles. It is believed that at least one Cologne supporter was left with a bleeding head.

Video footage also appeared to show away supporters attempting to break out of the police cordon outside of the Clock End, where they were being housed, to gain access to where Arsenal fans were gathering. Further footage also showed fans charging at an entrance to the stadium.

The German club were given an allocation of 2,900 but reports from the Emirates on Thursday evening suggested that close to 20,000 had planned on travelling to north London.