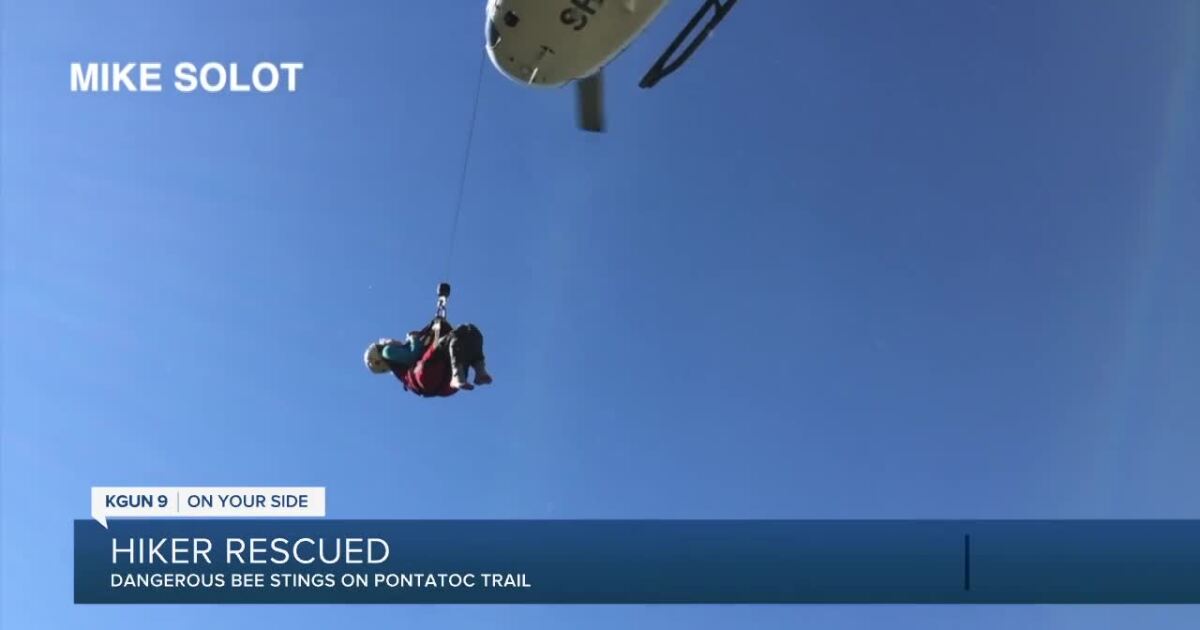 Kathryn Hill was hiking on Pontatoc Ridge Trail with her two friends on Monday.

A swarm of bees started to attack Hill and her two friends.

Hill said she could feel her heart starting to slow down and was in and out of consciousness.

Hill’s friends called 911 where search and rescue teams helicoptered Hill off of the trail and to an ambulance.

She was taken to the hospital after experiencing nausea, dizziness and pain from the multiple times she was stung.

“I knew I was really, really sick. I never felt like that before. I was kind of looking at the sky and honestly thinking this might be it,” said Hill.

Hill said she’s been stung by a bee before, but she never thought she was allergic.

All three hikers had packed head nets to protect themselves from bugs. They said by the time the bees started attacking, it was too late to try and put them on.

“You hear the phrase white as a ghost, that is exactly what she looked like,” said Mike Solot.

Solot was one of the hikers that was with Hill on Labor Day. He said there should be warning signs near the trail about the bees.

“When there’s a report of some killer bees on some trail or some portion of a trail, to post a warning as soon as possible and then people can be prepared if they want to bring their own bug net and set it up before they go on that trail,” said Solot.

Solot said he reached out to the U.S. Forest Service on Tuesday about his concerns.

On Thursday, the Coronado National Forest Service issued a statement regarding the situation that says,

“The Coronado National Forest is committed to providing recreational opportunities which does mean there are inherent risks when traveling in Wilderness areas. We do have signage at our trailheads reminding visitors of some of these hazards, but as we saw with the bees who are transient species, we are unable to account for every possibility on every trail. We encourage all visitors to carry their 10 essentials and know how to use them.”

When Solot returned back to the Pontatoc trail to retrieve items the group had left, he put up warning signs for hikers thinking about going on the trail.

“At least if they’re warned—I had the net for my head. I could’ve put the net over, but I couldn’t because it’s too late,” said Hill.

Hill said she’s thankful for the search and rescue teams that rescued her from the trail and saved her life.

“They’re doing the lord’s work– that’s what I would say to them. Thank you,” Hill said.

——-
Faith Abercrombie is a reporter for KGUN 9. Faith joined the KGUN 9 team in July of 2022 after graduating Arizona State University in May. Share your story ideas with Faith by emailing faith.abercrombie@kgun9.com or by connecting on Facebook, or Twitter.