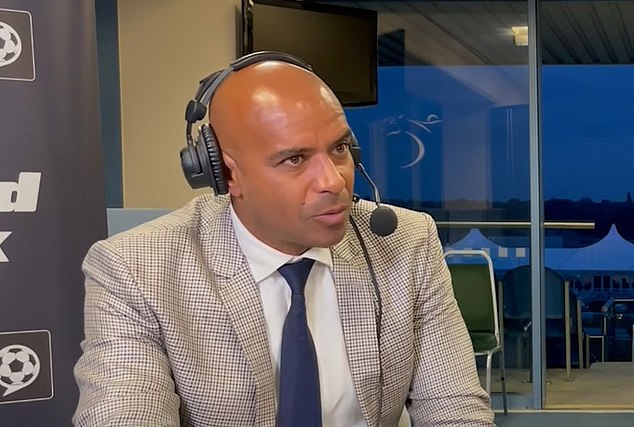 By Charlotte Daly For Mailonline

Former England footballer Trevor Sinclair has deleted his Tweet claiming ‘black and brown’ people should not mourn the death of Queen Elizabeth II because racism was allowed to ‘thrive’ during her reign.

Sinclair’s Tweet came shortly after Buckingham Palace announced the death of Her Majesty the Queen at the age of 96 on Thursday evening. Fans were quick to criticise the 49-year-old and called for TalkSPORT to sack the football pundit.

TalkSPORT said they have been trying to make contact with former Manchester City midfielder Sinclair, but the radio station have been unable to reach him.

Sinclair’s now deleted Tweet read: ‘Racism was outlawed in England in the 60’s & it’s been allowed to thrive so why should black and brown mourn!!’. His account has also since been deleted.

Former Crystal Palace owner and Sinclair’s TalkSPORT colleague Simon Jordan was quick to respond to him – saying his Tweet was inappropriate.

He said: ‘Trev, I’m really not sure that is an appropriate thought, let alone tweet. The country has lost a very significant person and respect and value should be the overriding sentiments not division!’.

Another one of Sinclair’s former colleagues at TalkSPORT, Georgie Bingham, was equally perplexed by Sinclair’s Tweet. She said: ‘Bloody hell Trev. What the hell are you thinking?’

Former Peterborough forward Aaron McLean also shared his disbelief at Sinclair’s comments. He wrote: ‘To say I’m confused as to why you’ve felt the need to tweet this is an understatement’.

Football fans across the globe were equally as shocked by Sinclair’s Tweet and called for action to be taken against the former Manchester City midfielder.

Fans took to the social media platform to say that TalkSPORT must sack Sinclair or face a boycott from their listeners.

One fan wrote: ‘Anybody following Trevor Sinclair please unfollow… he is a disgrace… Talk Sport have to get rid’.

While one supporter said: ‘Am trying to call TalkSPORTto sack Trevor Sinclair unbelievable from an ex England internationalist hang ur head in shame scum’.

Before someone else added: ‘Anyone seen Trevor Sinclair? Glad he has crawled back under the rock he truly deserves to be under. Thankfully P45’s can now be sent via email, TalkSPORT do the right thing’.

Others took to the social media platform to write direct messages to Sinclair – calling him ‘insensitive and uneducated’.

One supporter said: ‘To Trevor Sinclair, You are an insensitive, uneducated pr**k! The Queen devoted her life to serve this country & you pull the race card – you pathetic idiot… Show some respect as above all she was a mother & grandmother who was loved by billions!’.

Another added: ‘Trevor Sinclair I thought you were a good man a Hammer who spoke sense and came as cross as a top man but today you showed your true colours sorry but your a c*** God bless our Queen’.

TalkSPORT have since condemned Sinclair’s tweet, and confirmed that they have reached out to their employee as they investigate the matter.

They tweeted: ‘We have been trying to make contact with Trevor Sinclair following opinions expressed on his Twitter account. TalkSPORT does not support those views expressed and is investigating the matter.’

WHICH SPORTING EVENTS HAVE BEEN AFFECTED FOLLOWING THE DEATH OF THE QUEEN?

Manchester United’s Europa League clash with Real Sociedad at Old Trafford and West Ham’s game against FCSB in the Europa Conference League at the London Stadium went ahead on Thursday evening with pre-match tributes.

The Northern Ireland Football League announced that Friday night’s matches between Cliftonville and Glentoran and Larne and Dungannon have been postponed.

The English Football League also confirmed that Friday night’s Championship game between Burnley and Norwich and the League Two match between Tranmere and Stockport had been postponed, with a decision on Saturday’s fixtures yet to be made.

Friday’s play between England and South Africa men at The Oval, along with all scheduled matches in the Rachael Heyhoe Flint Trophy, will not take place.

Northampton announced the postponement of their Premiership Rugby Cup clash against Saracens scheduled for Thursday evening.

The Scottish Rugby Union has postponed all domestic competitive games this weekend as a mark of respect and the women’s summer Test international between Scotland and Spain on Sunday is also off.

Play was suspended for the day at the BMW PGA Championship and there will be no play on Friday.

Racing at Southwell and Chelmsford on Thursday evening was abandoned. The British Horseracing Authority also announced the meetings scheduled for Friday – including the third day of the St Leger meeting at Doncaster – have also been cancelled.

The Great North Run, the world’s largest half-marathon, is set for Sunday. Organisers cancelled its 5k sister event on Friday, with a decision of the main race due on on Friday.

Friday’s Tour of Britain stage was promptly cancelled and later on Thursday evening the rest of the tour, which was set to finish on the Isle of Wight on Sunday, was called off entirely.