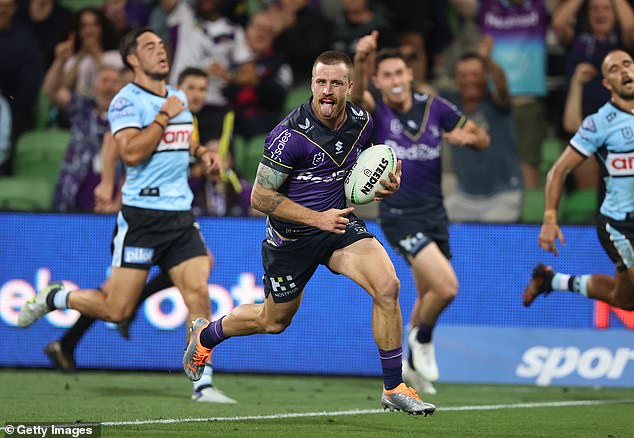 Wayne Bennett should pawn his seven premiership rings and throw in a lifetime supply of non-alcoholic cider if it would bring Cameron Munster to the Dolphins.

The new-look, non-drinking, clean-living Munster was beyond superb for the Storm against the Sharks on Saturday night and Bennett must leave no stone unturned to get his signature on a contract.

Even the fact that at this stage the Storm five-eighth won’t be available for the Dolphins’ first season next year is immaterial.

Bennett has said all along that he is looking at a three-year plan, with 2024 and 2025 just as important as the fledgling club’s debut season, and if that means waiting 12 months for Munster to move back to Queensland, so be it.

Munster scores a sensational try against Cronulla on Saturday night. The Storm’s head-scratching decision to ask him to take a pay cut is right up there with the Broncos punting supercoach Wayne Bennett to make way for Anthony Seibold

Besides, just because Munster is contracted to the Storm for 2023 and Melbourne CEO Justin Rodski has said the club won’t be letting him go before he has served his time, when did that ever count for anything in rugby league?

If Bennett wants him, and Munster wants to go early, you can put your pay on the fact that it will happen.

And if it does, the Storm will have no-one to blame but themselves.

How a club could make a low-ball offer to a key player like Munster in order to throw more money at winger Xavier Coates is a mystery Agatha Christie couldn’t come up with.

No disrespect to Coates, he’s a fine young player, but good wingers are a dime a dozen. Look at some of the tries scored by numbers two and five on the weekend and you could be forgiven for thinking there’s a factory somewhere rolling them off a production line.

Tall, fast, long-striding and able to leap tall corner posts in a single bound, they all look alike and play alike.

But in 640 minutes of football played over the round there was only one Cameron Munster.

If the rumours are true and Newcastle have withdrawn their offer to Ponga, Dolphins coach Bennett could have his pick of him and Munster – with the Storm star easily the better option for building a club around

Rodski has been in the boss’s chair at the Storm for just a short time, but you’d think he would have worked out by now that the big money goes to the playmakers, not the finishers.

Offering Munster $750,000 a season when his market value is at least $1 million could turn out to be the biggest blunder by a club CEO since the Broncos ditched Bennett and signed Anthony Seibold.

Bennett was a shattered man when that happened in 2018, but he’s got his trademark grim-faced mojo back now and is desperate to sign a marquee player.

Last week it looked like he was holding an empty hand. Right now, he’s got two aces up his sleeve.

If reports that the Knights have pulled their offer to Kalyn Ponga in order to chase Munster are correct, Bennett could find himself in a no-lose situation.

The Dolphins would suddenly be in the box seat to sign Ponga for 2023, and still be in with a chance to also snare Munster for 2024.

If they can only sign one, there’s no question which one it should be.

Mike Colman’s advice to Wayne Bennett is simple: Do whatever you have to in order to get Munster, even if it means pawning your premiership rings

Ponga had his best game of the season on Sunday, but let’s not forget it was against the Dragons whose form has been tepid, to put it nicely.

Munster’s five-star performance was against a red-hot Sharks team that put the Storm under the blowtorch in the best first half seen all year.

In the end the difference between the two sides was Munster. Could Ponga have made the same impact against that Sharks outfit?

Not on what he’s been showing lately.

Ponga may be the king of the kids in Newcastle, but he is not in Munster’s class.

Dylan Edwards (right) and Keenan Palasia were sin-binned after getting a bit slap-happy. The decision gets referee Adam Gee the dunce of the week award

If the Dolphins sign Ponga as their marquee player they’ll be buying a name.

If they sign Munster, they’ll be getting a player they can build a club around.

You don’t have to be a genius to work out which one Wayne Bennett would prefer.

If Munster’s performance against a resilient Sharks’ side was the best of the round, the dunce’s cap this week once again goes to a referee, in this case Adam Gee who was in charge of the Panthers-Broncos clash on Friday night.

Have you ever seen anything more ridiculous than Panthers’ fullback Dylan Edwards and Broncos’ prop Keenan Palasia being sin-binned for face slapping?

Given that, it was surprising that Broncos’ forward Koby Hetherington only got a $1000 fine for pulling Jarome Luai’s hair.

You’d think he might have got a least 10-minutes in the naughty chair.

What’s next, four-week bans for pinching and Chinese burns?

Maybe we’ll find out next week.