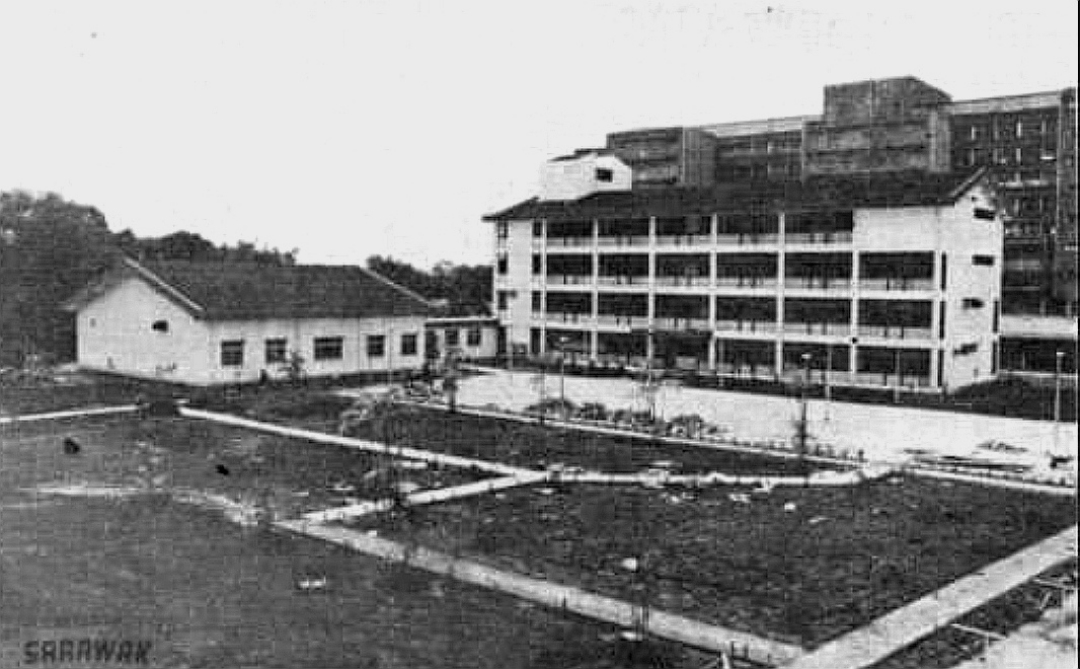 The Sarawak General Hospital in Kuching, in the early 1950s.

SARAWAK is the foremost exponent, and I’d personally say the most successful, state within Malaysia at establishing a state-of-the-art public health services for the entire nation.

Just last Wednesday, our Deputy Premier Dato Sri Dr Sim Kui Hian had announced the nation’s first health metropolis corridor in Samarahan, encompassing a 5km area that would come equipped with a medical and research hub for services and universities providing the manpower.

Dr Sim had stated: “Located together with the Sarawak Heart Centre, Sarawak Infectious Diseases Centre, and nearby Unimas (Universiti Malaysia Sarawak), it will have an industrial free trade zone for manufacturing, airport and port connected with the Autonomous Rapid Transit (ART) for mobility. It will be an important medical hub for Sarawak for the next 50 years.”

On the ground and based on first-hand experience, I can personally vouch for the extremely high standards of customer service as well as health facilities and availability of the best care, treatment and research that anyone in need of its health facilities would require.

This encompasses all the various disciplines that are in the health spectrum: from a simple general practitioner’s normal medical attention to more specialised fields ranging from heart, kidney, liver, other organs and the many other forms of healthcare including mental health.

Despite the fact that today we all enjoy virtually free medical public healthcare for all citizens, there are still obviously many areas of concern, or where it seems that attention and focus have not been up to expectations.

An artist’s impression of Sarawak General Hospital, newly-redeveloped and expanded after 2021.

This week’s column seeks to neither pinpoint nor critique the many shortcomings, complaints or feedback that have been often discussed or aired on public forums and social media, but to bring to the attention of the authorities the areas where more attention should perhaps be focused upon, either to be rectified, improved, enhanced and made better, with more satisfied patients of the increasingly more discerning public at large.

Although many of these feedback and negative comments have been repeated or heard over and over again in recent times, the possibility that they might have fallen on deaf ears and unbelieving authority figures could well be the case: often such constant moans and groans from what could be termed by those in authority to be simply ‘chronic complainers’ could well have the opposite effect of negating the genuine and real concerns.

I shall use real life experiences as told to me first-hand in some of the following examples of what have transpired in the many regular interactions between patients and the authorities concerned in their various fields of medical endeavours.

For those not familiar with the procedures and processes, let me briefly describe what actually happens when a patient goes to a local polyclinic and/or specialist centre for his regular medical check-up, or for emergency services.

For a regular check-up, he would first go through the formality of presenting his appointment card to the reception counter, where a queue number is allocated to him. If he was there just to take a sample of blood or urine, he would go straight to the appropriate counter to do the same, be given a plastic container for his urine sample and to wait for his number to be called for a blood sample extraction.

That is pretty straightforward.

For a regular check-up, he would need to wait for his number to be called to the room to see the doctor: if he had special needs, e.g. eye problem or diabetes, he’d have a special check-up before the main medical examination. Prior to seeing the doctor, he’d have his blood pressure, glucose reading, weight, height and waistline measured and compared to his last visit.

The queuing time could be anything from 30 minutes to 90 minutes, although by the time he’d be called in, his actual medical examination by the doctor would normally take less than 10 minutes, unless there was something extremely wrong with his current health status.

He’d be given a prescription, with which he’d take it and present to the Pharmacy, and wait another 15 to 45 minutes to collect his medications.

In the meantime, he would also go to make his next appointment at the senior nurse’s station.
If he’s lucky and on a good day, supposing he had gone into the polyclinic at 8am, he should be lucky to be able to get out, with his meds, and go home by at 10am the earliest, or 11.45am if there was a very big crowd that day.

But don’t forget that everything is free of charge and if his prescribed meds were the usual ones for hypertension, diabetes, minor heart or any other issues – on average the cost of a month’s supply of medications would probably be RM50, and the doctor’s consultation fee (at a private clinic) be another RM45 to RM90; so he’d be saving around RM150 per visit.

On average, a patient would see his polyclinic doctor on average three times a year, sometimes a bit more often.

Yet for all these great benefits, I do not begrudge those who have hopes that the total experience could still be better and all that it needs is some care, attention and really some sheer humanity shown by those who are actually manning their posts and ensuring that everything moves along expediently and smoothly.

I would like to quote a good friend of mine, G. Ghazali who had shared this on his Facebook update recently: “Going to a government hospital is still a dreaded experience. You can accuse me of generalising, but I have yet to know any government health facility where the staff, including the security, are not the ‘holier-than-thou’ type; where the public parking truly accommodates the visitors rather than being miles away from the hospital, or there’s someone to actually direct where is where, rather than all the counter people assuming that all visitors have built-in Google map or Waze.”

Sure there are staff and personnel who would go the extra mile to help or to ensure that one’s experience would be less stressful or less of an ordeal. I’ve personally been attended to by staff who’ve been most helpful, cheerfully and with a smile as well as doctors with a great sense of humour, and nurses who’d brighten your day with a kind word or two.

I’d also like to see a more efficient system of attending to patients; a better appointments schedule (and availability to change/alter), as well as a more uniform standard of drug prescription.

Did you know that if you actually went to three different specialist clinics, they would prescribe you the same meds three times over and there’s nothing in their current system to actually correct this!

I must also applaud the many various medical staff, especially nurses and doctors and pharmacists – from the Specialist Clinic at the Sarawak General Hospital, to the A&E Emergency, to the Sarawak Heart Centre – they are all the crème de la crème of our medical profession and I do salute them all.

The Sarawak Heart Centre at Kota Samarahan near Kuching. Established in 2000, it is a pride of Sarawak when it comes to medical and healthcare services.

Aside from increasing the head count and the numbers of staff, and aside from expanding the current facilities and expediting the issue of seeing individual patients (their numbers can only further increase over the years), there is not much else that they can humanly do to improve their services.

We have a huge need to urgently computerise everything in the system so that there would be a common link to all patients – no matter where they have originally registered or whatever clinic or hospital service they have required, so that there would be a centralised system whereupon a medical practitioner can immediately refer to all available information on that one single patient without the hassle of conducting referrals or checking with other departments.

I just wonder why that has not been already done!

I am confident that with our present state government and the professionals in their current positions, we can look forward to fulfilling Sarawak’s dream that we would have the best – the state-of-the-art medical care and facilities available for all, within the next few years.