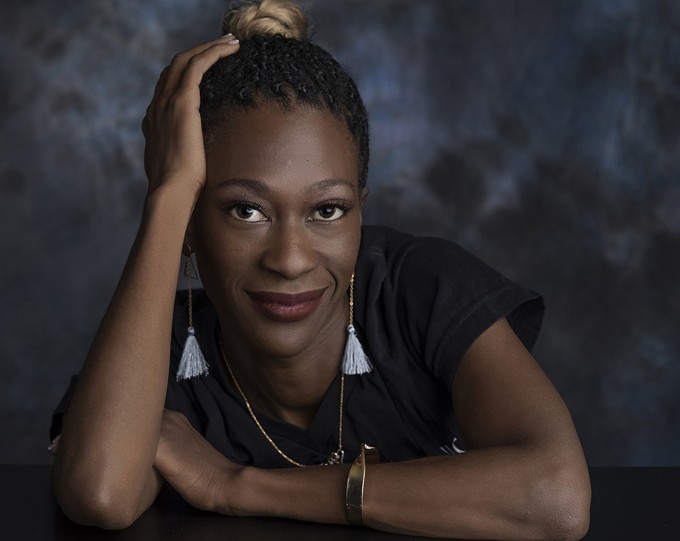 The crowd roared as Stephanie Lyonga-Farrington strode from the back of the room to the open mic stage at Laff’s Comedy Club, statuesque and every inch a queen in her leopard-print bathrobe. By the time she got there, she owned all the attention in the room. She took the mic and belted out her jokes like a boss — raw, salty and sometimes rude — poking fun, with a smile from here to yonder. At the end of her set, pretty much everyone wanted to be her best friend.

It was 2016 and Lyonga-Farrington just performed her first 3 minutes of standup comedy.

Now she’s ready to take charge of the whole Screening Room (at 127 E. Congress Street), at 7 p.m. Saturday, Sept. 10, when she produces her first comedy and musical variety show, “Sessions with Stephanie Presents: What’s Up Muth@&?@!” Tickets are $8 via screeningroomdowntown.com/comedy-and-music.

Lyonga-Farrington said that as a kid growing up in Cameroon, Africa, she had a reputation as a storyteller. But it took more than a year of a co-worker’s dogged goading to get her to a comedy stage. “I worked for TUSD,” she said, “Shout out to Erickson Elementary! I made a very good friend with one of the monitors. We would go across the street by the stop sign a on break and smoke cigarettes and talk about all the stuff that had happened during the day. At an elementary school there’s so much going on, there’s never a dull moment with children.

To this day, she said kids, including her own two, are her favorite, and easiest, comedy targets. Yet she tells even family stories with the attitude, vocabulary and volume of a master sergeant. All that, she said, she learned in the Army.

“I joined the Army because a recruiter came to my (Chicago-area) high school and convinced me to join,” she said.

It was partly that she wasn’t ready to go out on her own after graduation. “I was 18 and never left the house before. I was scared. But when I got to (boot camp) at Fort Jackson, South Carolina, it was a bunch of other 18-year-olds who had no idea what we were doing. So I was, like, ‘OK, I can do this. We can all be lost together!’”

Lyonga-Farrington said her time in boot camp was fun and easy. “I was learning inventory stuff, warehousing stuff. And then it was December of 2002, I believe, we got shipped to Fort Hood. We got orders to go to Iraq and I was excited at first, but when I told my dad, he said, “Honey, I don’t think you should be excited about going up there.” Then she laughed.

“That’s when things really got real,” she said. “That was in 2003 when the war had just started. I’d never been in a war before, so I didn’t know what to expect. Right? So with all the, the hardcore training we were getting, I was like, ‘Okay, I don’t think anyone in this place that we’re going to is going to be friendly.’” Her grin belied the seriousness of what she was saying.

“When we were barely even descending to land at the airfield,” Lyonga-Farrington said, “they were shooting at us! And I remember I said, ‘What is that noise?’ And the higher-ranking officials that were riding with us – they had done this before. They’re like, ‘Oh, we’re just getting shot at.’ And I’m like, ’What? No, I didn’t sign up for this!” And she remembers how, no doubt because it was Lyonga-Farrington, everyone laughed.

She doesn’t write her material, she said, partly because she doesn’t remember it, but mostly because she keeps thinking of other stories she wants to tell. There’s no telling what will occur to her on Sept. 10 when she gets to take over the Screening Room stage with a couple of squads of her own favorite local entertainers. Lyonga-Farrington is headlining a lineup that includes three of Tucson’s best: Cami Anderson, Charles Ludwig and Monte Benjamin. Musicians, DJs and rappers who will perform between comedy sets include Benny Forever, Freddy J Music, Seanloui, Rhythm Iz and Lyonga’s husband TR3 (Tre Farrington). Shy Dick (Coy Johnson) will host.

You may as well know it is impossible for this writer to report objectively about Marc Maron. She is overwhelmed with an unabashed crush on Sam Silva, cynical and borderline exploitative impresario of the hilariously florid, and game, women’s wrestling team “GLOW.” Queue it up on Netflix for a three-season binge.

The real Marc Maron is a hair less cynical and much better-read. His standup material drills down on the existential crises we experience thinking about the news of the day. Any day. We just don’t know, he reminds us, and then he riffs on a range of causes and effects of our confusion. He’s no Sam Silva, and that’s a good thing. Instead, he is a thoughtful man. He takes us down rabbit holes most of us would rather trade for a beer and a round of “Cards Against Humanity,” but therein lies the comedy.

The Rialto Theatre presents “Marc Maron: This May Be the Last Time” at 8 p.m. Friday, Sept. 16, at The Rialto Theatre, 318 E. Congress Street, rialtotheatre.com, $39 to $65. Here’s some fair warning, though. Christians: A short bit in the show might be uncomfortable, but all’s well that ends well, and it pretty much does. We can’t say the same for his evisceration of MAGA folks.

Many fans know Maron from his celebrity-packed podcast “WTF with Marc Maron.” He committed to a comedy career as a kid growing up in Albuquerque listening to ’70s LPs by George Carlin and Richard Pryor. He graduated from Boston University with a BA in English and film, then performed and worked in Los Angeles at the legendary Comedy Store. He later moved to New York City and became a fixture on the comedy scene. There he cultivated a brainier, more narrative comedy style.

After visiting Israel in 1998, he staged a successful Off-Broadway show, “The Jerusalem Syndrome,” and wrote a book reflecting on his Jewish heritage. Then came a run of more than 30 appearances on “Late Night with Conan O’Brien,” and a tempestuous journey with his anger issues and the corresponding evolution of his “WTF” podcast. By 2013, “WTF,” then broadcast semi-weekly, was being downloaded between 2.5 million and 3 million times per month. In 2015, President Barack Obama traveled to Maron’s garage studio to be interviewed.