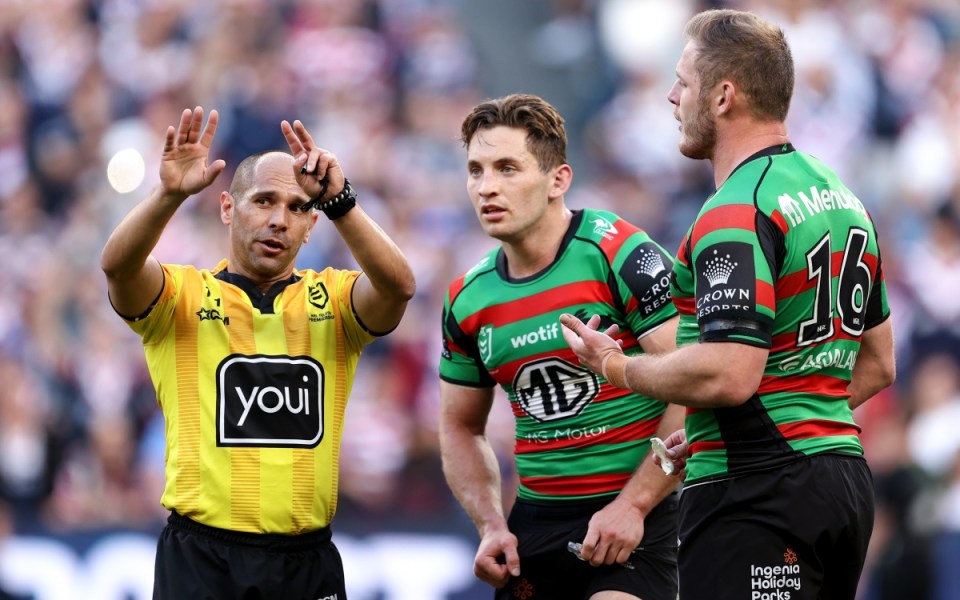 Seven players were sin-binned as the two traditional rivals met for a fiery contest at Allianz Stadium on Sunday afternoon.

In the first half, prop Burgess and winger Milne were given 10-minute spells in the sin bin for high tackles that came within a minute of each other.

Burgess was sin-binned after committing two high shots in the space of 30 seconds, the first leaving Roosters captain James Tedesco with a game-ending concussion.

An emotional Latrell chokes up at the roar of the Rabbitohs crowd. ❤️️💚 #9WWOS #NRL pic.twitter.com/wVU0QLeY6X

The second hit on Matthew Lodge left referee Ashley Klein with little option but to give Burgess a spell.

Milne wore a punch from Victory Radley that left the Roosters lock sin-binned but was ordered from the field himself after hitting Joseph Suaalii high.

At the hour-mark, Tatola became the fifth player of the night to spend time in the sin bin when he slammed Egan Butcher’s head into the ground, sparking a melee.

A high shot on Connor Watson resulted in Milne spending another 10 minutes in the bin, only four minutes after Tatola left the field.

Although they have depth in the outside backs to cover Milne, the Rabbitohs can ill afford to lose Burgess or Tatola for next week’s sudden-death semi-final against the Sharks, who finished the season second on the ladder.

Burgess, 30, is averaging more tackle breaks this year than ever before and is running for 140 metres per game, while Tatola was recently crowned the Rabbitohs’ player of the year for his consistency through the middle.

The crowd became heavily involved in the chaos, booing Latrell Mitchell constantly despite the Souths fullback’s request for fans to go easy on taunting in the finals.

But despite the negative attention, it was the fullback and his partner in crime Cody Walker who carried the Rabbitohs through the carnage.

Mitchell had a hand in the first try of the game, another four-pointer to the prolific Alex Johnston.

The Rabbitohs knocked the Roosters out of #NRLFinals in one of the most chaotic matches you’ll ever see! pic.twitter.com/S5t93YX2ba

His side down two points and reduced to 11 men, Mitchell spotted Sam Walker out of the defensive line and barged over for a try of his own that gave Souths the lead at the half.

Walker extended the Rabbitohs’ advantage after the restart, first finding Johnston on the wing with a cut-out pass, then providing for edge-back rower Jai Arrow, who pounced on his grubber kick.

When Tatola and Milne were sin-binned, the Rabbitohs were again reduced to 11 men but held on to emerge victorious from the physical battle.