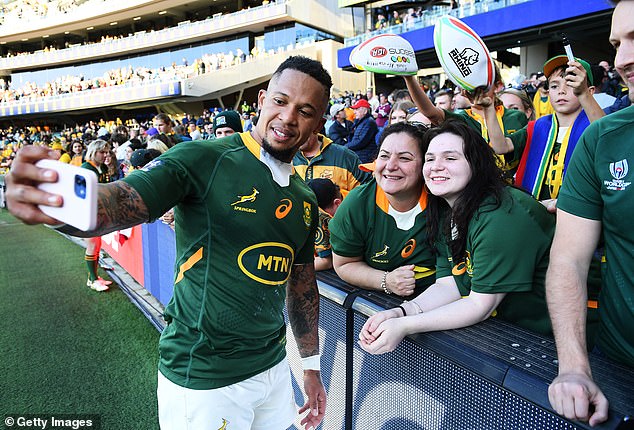 By Alex Bywater For Mailonline

World champions South Africa have been rocked by scandal after fly-half Elton Jantjies and Springbok dietician Zeenat Simjee were sent home from Argentina.

Reports in the Rainbow Nation suggested the married Jantjies and Simjee, who is not believed to be married, have been having an affair.

A South African statement read: ‘The Springbok management are aware of reports regarding Springbok fly-half Elton Jantjies and team dietician Zeenat Simjee between the training camp in Sabie and the Test match against New Zealand in Mbombela earlier this year.

‘No team protocols were breached, but the individuals are returning to South Africa to attend to these personal reports and to eliminate any distractions to the team’s preparations for the Test against Argentina.

‘No further comment will be made at this time.’

The Afrikaans publication Rapport reported that several sources were made to feel awkward with Simjee and Janties making noises at their accommodation throughout the night and into the early hours.

Simjee and Jantjies have not broken South Africa’s team protocol, according to the Springboks

He is alleged to have left without paying housekeeping fees of £200 and then accruing a bill of £1295 at a separate guest house.

Rapport say some of the funds were spent on flowers that included a note where Jantjies confessed his love to Simjee.

Jantjies has been no stranger to controversy this year.

He was arrested in May over allegations he caused damage on a flight from Dubai to Johannesburg.

The charges were withdrawn in June, with reports stating they were dropped after he agreed to pay for the damage he caused.

His lawyer Nabeela Moola told AFP that charges had been provisionally withdrawn ‘based on the representations made to the state.’

The case was later withdrawn by South African prosecutors, on the orders of the senior state prosecutor, with no reason given publicly.

Full-back Damian Willemse can also cover No 10, potentially threatening Jantjies’ position ahead of next year’s Rugby World Cup in France.