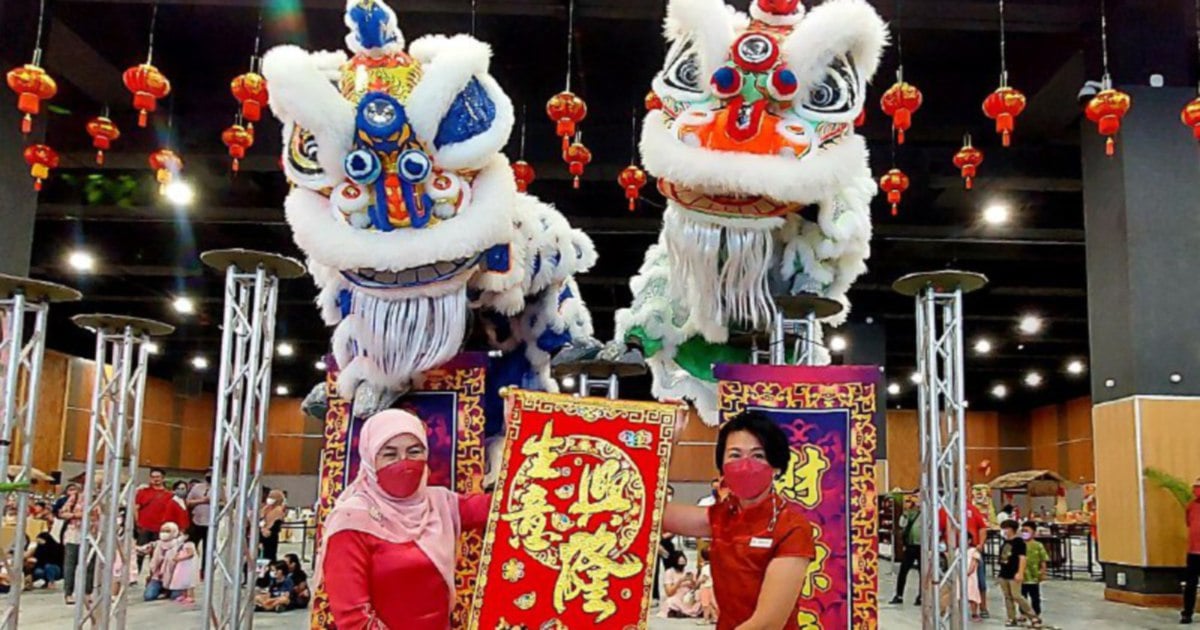 KOTA KINABALU: The sound of the lion dance reverberated across the Sabah International Convention Centre (SICC) here after a year’s hiatus due to the Covid-19 pandemic.

It was an exciting moment especially for children who were thrilled to watch the dancers showcasing their acrobatic skills in a new repertoire, climbing up vertical high poles before moving on to dance on top of the jumping poles and ending with a somersault landing.

“The Chinese New Year atmosphere is back with the beating of the drums and cymbal clashes to enliven the festival, as without the lion dance, the celebration will not be complete like last year.

“We are very thankful to the federal government for allowing the lion dance to be performed this year which is part of the Chinese culture and also allowing us to keep the tradition alive,” said Xu Xiang Dragon and Lion Dance Club team owner Isaac Ong.

“We quickly assembled the dancers after the government made the announcement and we rehearsed in just two weeks.

“We have no problem to get ready in a short period of time as most of our dancers are experienced,” said Ong, whose lion troupe was invited to roar-off the second-day of the Year of Tiger.

SICC presented bountiful delicacies at its ‘Chinatown stalls’ spread of more than 600 dishes from Chinese, Indian, Malay and Western cuisines to treat the guests.

“For example, there are fewer people cooking the beggar chicken dish nowadays, therefore, I decided to preserve this treasured dish from being lost in time,” he said.

Ang explained that the dish got its name from a practice where beggars would wrap the chicken with earth to preserve it as they did not have a place to store the chicken.

Another highlight was the making of the longest Swiss-roll cake by pastry chef Salfean Salleh and his team.

It took 20 chefs to transform the mandarin orange cake into a dragon in one and a half-days.

The 54.8m (180 ft) cake weighing 200kg was inspired by the dragon, which is one of the 12 Chinese horoscopes to symbolise longevity, he said.

“We have used 100kg of flour and 50kg each for cream and orange flavour to produce the long cake, which is the first time I am doing it,” he said.

SICC chief executive officer Datuk Rosmawati Lasuki who led the tossing of yee sang said the Chinese New Year buffet was held to showcase the multiracial and multicultural communities of Sabah converging together to enjoy the festivities.

“Even the people from the mosque (City Mosque) had also come to celebrate the festival. In Sabah we enjoy festivities together,” she said.

“Today we have about 700 guests and we have prepared about 600 tantalising dishes for the guests to enjoy,” she added.

SICC’s Kinabatangan Hall can sit about 2,000 to 3,000 guests at one time but due to the standard operating procedures (SOPs), the number of guests were limited.