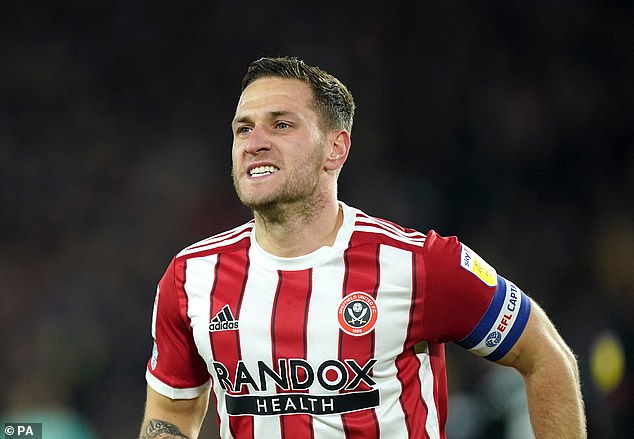 Nottingham Forest’s greatest night this century was overshadowed by a brutal attack from a supporter on Sheffield United forward Billy Sharp in the seconds after their victory in the Championship play-off semi-final.

As fans spilled on to the pitch to celebrate their victory on penalties, one ran towards Sharp – not deemed fit to take part in the game – who was standing in the technical area.

Footage appears to show Sharp being floored by a headbutt. He was being treated at the ground and needed stitches.

‘Billy was minding his own business and he was assaulted, blind-sided,’ said manager Paul Heckingbottom.

‘It was cowardly. Billy is shaken up and he needed stitches. We have the footage.

‘We always see people talking about player safety but nothing is ever done about it.’

Forest were aware of the incident last night and were preparing their response.

These events soured what had been a fabulous semi-final, with Forest goalkeeper Brice Samba the hero in the penalty shoot-out.

Samba saved three of United’s efforts – including the decisive one from Morgan Gibbs-White – to set up a Wembley meeting with Huddersfield Town on May 29, with the winner sealing promotion to the Premier League.

This is the second night in a row there have been problems at a play-off semi-final, after Luton boss Nathan Jones complained about Huddersfield fans’ behaviour after his side’s defeat.

Sheffield United manager Paul Heckingbottom not only provided an update on Sharp, but he was left furious by incident and made it known in his post-match interview.

‘We’re seeing things thrown on the pitch and things that are thrown on putting players’ health and safety in danger and nothing’s ever done about it.

‘How can you come to a place of work minding your own business and be assaulted in that fashion?

‘It’s just bang out of order and it’s everything that’s wrong. Too many times we hear people condemn it, but nothing’s done about it. We’re the ones that suffered.

‘It’s upsetting for a lot of reasons – I don’t want to say too much more about it. He’ll be dealt with.’

Covering the game for Sky Sports, former Forest defender Michael Dawson condemned the incident, saying: ‘That is an absolute disgrace.’