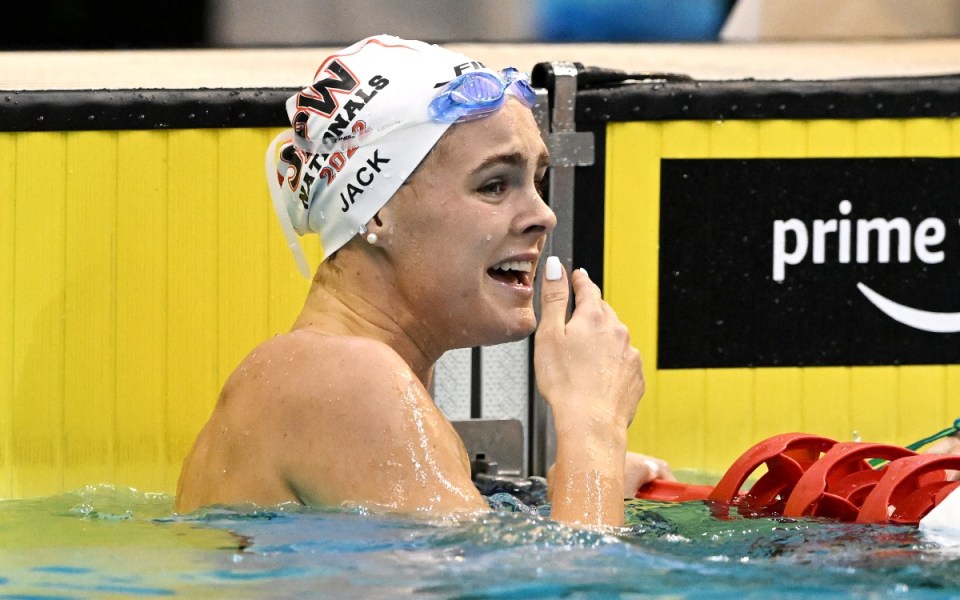 An emotional Shayna Jack has wept tears of joy after securing selection on Australia’s swim team in her comeback from a doping ban.

Jack will swim at this year’s world titles and Commonwealth Games, where she will be joined by pop star Cody Simpson.

The 23-year-old broke down after sealing a 100 metres freestyle spot at the national championships in Adelaide on Wednesday night.

Shayna Jack is back on the Australian swim team after an amazing effort in the 100m freestyle final.#9WWOS #2022AusTrialshttps://t.co/EX8vefzGJ7

That feat earns her automatic selection for the world championships in Budapest in June and the Birmingham Commonwealth Games in July-August.

“I am just overwhelmed with emotions to be back on the team,” a teary Jack said.

“Not many people really know what I actually went through, the depths of it.

“And to be back and wearing those (Australian) colours again means more than anything to me.”

Jack was initially banned for four years after testing positive to the banned substance Ligandrol about three weeks before the 2019 world championships.

The Queenslander’s suspension was reduced to two years on appeal to the Court of Arbitration for Sport, which found Jack did not knowingly ingest the substance.

What a first night of finals at the #2022AusTrials with incredible stories throughout the session.
Catch up with all the results here:https://t.co/lMeFcVqOHX
📸:Delly Carr pic.twitter.com/TLK1AO21gR

Swimmers finishing in the top two in a final at the nationals gain selection for the worlds and the top three placegetters earn a spot for the Commonwealth Games.

Simpson finished behind winner Matt Temple and Kyle Chalmers, who will skip the worlds to focus on the Commonwealth Games.

Chalmers’ decision to bypass the worlds means Simpson is a likely discretionary selection for Budapest, while being a certainty for the Commonwealth Games.

“I certainly didn’t even expect it to even be a possibility until 2024,” Simpson said of being on an Australian team.

“The fact that stuff has started to happen so quickly, so early, is just unreal.”

Does it make me old or just into sport that I know more about Cody Simpson the swimmer yet very little about his music career?

Apparently he has dated some famous girls too.

Quite the back story for a Comm Games rep..

Simpson, 25, was a promising junior swimmer before becoming a global pop sensation after releasing songs on YouTube from 2010.