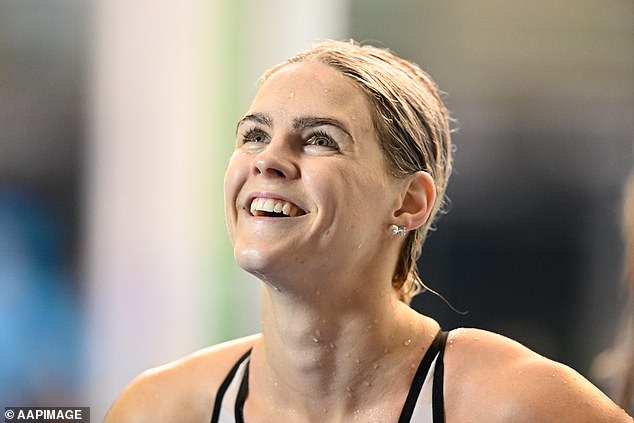 By Ollie Lewis For Mailonline

Swimmer Shayna Jack has made a triumphant return from a doping ban by securing a berth on Australia’s team for the world titles and Commonwealth Games.

Jack, 22, finished second behind Mollie O’Callaghan in the 100 metres freestyle final at the national championships on Wednesday night in Adelaide.

Jack’s swim earns her automatic selection in the event at the world titles in Budapest in June and the Commonwealth Games in Birmingham in July-August.

The World Championships and Commonwealth Games medallist was one of the rising stars of the pool until her world came crashing down in 2019.

She appealed her four-year ban and had it halved late last year after the Court of Arbitration for Sport found she did not knowingly ingest the prohibited substance.

Sport Integrity Australia is appealing the reduced sentence, but for now she is free to train and compete – and wasted no time diving back in.

Last week, Jack was spotted looking happy and relaxed as she arrived at Brisbane’s St Peters Western Swim Club with coach Dean Boxall at 6am.

‘The water has never felt so good. I cannot begin to describe how amazing it felt to walk through the gates with my coach and squad. I know I am stronger mentally and physically,’ she wrote.

She captioned an Instagram Story video: ‘What we’ve all been waiting for. I’m back. There is no better feeling.’