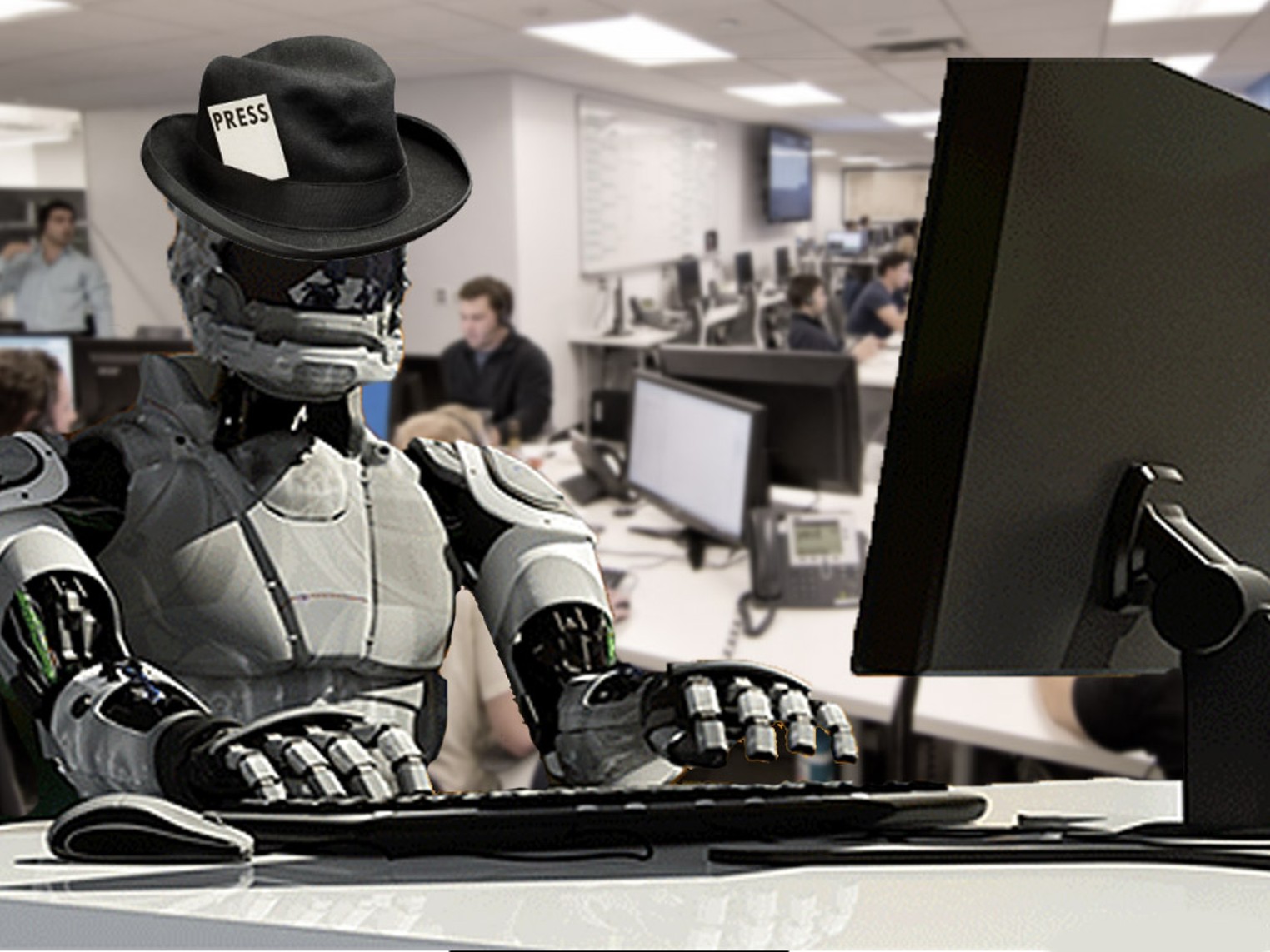 Some of you may have noticed that a short Phoenix New Times story from 2009 has been trending on the website for weeks.

New Times folks wondered why, and set out to solve the minor mystery.

On June 4, 2009, New Times reported Michael Brian Miller had murdered his wife and daughter and critically injured his son with a kitchen knife in the family’s Glendale home.

Miller was sentenced to life in prison in December 2009 and remains behind bars with no chance for parole. Not much has happened with the case since.

But in recent weeks, Miller’s name began to resurface across the internet and on people’s social media feeds. Hundreds and hundreds of times.

Between March 20 and 22, oodles of mangled versions of our story were posted to websites everywhere.

Like a twisted kids’ game of telephone, robots used artificial intelligence software to rehash our news brief over and over. With each permutation, just as in telephone, the message got increasingly garbled. The story became more unreadable — and despite the somber subject — hilarious with each permutation.

But media experts see this bizarre phenomenon as a dangerous development in the fake news epidemic,  with devastating implications for journalists and news consumers alike.

In the original New Times story, our old friend Ray Stern wrote, “In another twist, Miller claimed he stabbed his son the most because he loved him the most.”

On March 20, a Turkish entertainment news website called tvguidetime.com published a reworked version, saying, “Since he esteemed his youngster the most, the factory administrator announced that he had harmed him the most in another breeze.”

A hallmark of this AI software is mistaking last names for common nouns, often replacing “Miller” with “mill operator” or “factory worker.” Some variation of this gibberish appears in every single replication.

In the original story Stern also wrote, “Cops who arrived at the scene found Miller was honest about his crime: His wife and 10-year-old daughter were dead. His 4-year-old son was critically injured. Miller had taken a knife to them; officers encountered a bloody horror show.”

Robots on an Icelandic entertainment news website called travotkt.com had a hard time with that line.

This was the result:

“Cops purportedly confirmed up on the scene immediately and situated Miller doesn’t normally fiddle alongside along with his harmful habits: his very important completely different and 10-year-old woman have been every lifeless. Mill operator’s 4-year-old little one was furthermore said to have been genuinely stung. Mill operator had positioned a blade to them reality be suggested; authorities should confront a frightening terribleness presentation.”

Each site is littered with ads that generate revenue every time a person clicks the link.

“It makes almost no sense after going through the transformation, which makes it doubly weird,” Dan Gillmor, director of News Co/Lab, told New Times.

News Co/Lab is an initiative to elevate news literacy and awareness at Arizona State University’s Walter Cronkite School of Journalism and Mass Communication.

A leading chronicler of the dot-com boom, Gillmor started writing a weblog for The Mercury News in San Jose, California, in 1999, which is believed to have been the first by a journalist for a traditional media company.

In 2005, he worked with a start-up venture in citizen journalism called Bayosphere, which aimed to “make it easier for the public to report and publish on the Internet.”

But there is another side to the advent of widespread online publishing.

“While I wouldn’t call this an example of plagiarism, it’s obviously lame and — especially if it’s designed to create revenue-producing internet traffic — unethical,” Gillmor said.

But Dan Barr, a veteran media lawyer in Phoenix, claims these shadowy website operators are breaking the law.

“It’s copyright infringement,” Barr told New Times. “By using an algorithm to get similar words, it’s still replicating somebody else’s work and seeking to profit off of it.”

Willful copyright infringement can result in criminal penalties including imprisonment of up to five years and fines of up to $250,000 per offense.

It’s a problem that has existed in recent years in the academic sphere, Barr said. University professors have grappled with their students using paraphrasing software to evade plagiarism detectors since at least 2017.

Now it’s cropping up in journalism, in stories you might read.

“Any time they’re not attributing where they got the source material from, of course, it’s plagiarism,” said Hill. “But it has been butchered so much that it almost doesn’t have much relationship to the original piece.”

Hill was responsible for launching WashingtonPost.com in 1995, and continues to study the intersection between journalism and technology at Arizona State.

None of the websites hosting mutilated versions of the New Times‘ 2009 story offer a way to contact them. The sites, mostly based in Asia, are hosted by generic internet domain registrars like Tempe-based GoDaddy Inc.

Paraphrasing from news reports and attributing properly is nothing new in the field of journalism. Even industry titans like The Associated Press have rolled out robots that generate and publish news content.

But this is different.

“By changing every word, it is almost like another category of thievery,” Hill said. “It’s dangerous for a reader. It fosters distrust of the media.”

After a certain number of permutations, the fake news bots began to get details of Miller’s case flat wrong.

The tvguidetime.com article calls Miller’s wife, Adriana, an “accomplice” in the crime. In reality, she was one of the murder victims.

Another iteration of the story on showbizcast.com, an entertainment news website based in Nepal, claims Miller’s son “survived a fatal murder.”

Right. Sure he did.

Showbizcast.com even uses phony bylines, writer bios, writer headshots, and embedded media in its articles, attempting to add a dash of credibility to the fabricated and plagiarized content.

44bars.com, yet another pseudo-entertainment news website registered in Iceland, made the totally fabricated claim that “Michael hasn’t given accurate data about his date of birth” in a March 20 article.

Many of the rip-offs give the illusion that the gruesome crime happened recently.

The same website claims that “Additionally, Miller came into the spotlight for a homicide case in 2009.”

Additionally? Because there was no spotlight when he sat in a courtroom. Whatever.

And it asserts that Miller, who has been in prison for 13 years, “should serve time in jail.”

The false information that results from AI paraphrasing, including pointing the finger at the wrong person for a double murder, is especially dangerous when it’s duplicated hundreds of times across the internet, experts say.

But it can be confusing for a news consumer.

“When they compare these thousands of articles against New Times and see it’s different, they might not know who to believe,” Hill said. “They share this salacious content with their friends, and the fake news spreads.”

It’s not an easy legal battle to fight.

“Suing them is a practical problem,” Barr said. “Locating who these people are and serving them a lawsuit would be very difficult.”

Attorneys and academics worry about the implications.

Hill points to Pizzagate, a debunked conspiracy theory that went viral in 2016. Proponents of the theory believed high-ranking Democrats were operating a child sex-trafficking ring in the basement of a popular family-style Washington, D.C., pizza parlor. A North Carolina man stormed the Comet Ping Pong pizzeria, brandishing a rifle in order to “save the children.” Edgar Maddison Welch was sentenced to four years in prison in 2017.

“You never know how readers will respond to something,” Hill said. “There are a lot of people who can take some fake news, believe it, and go out and act upon it. That is always dangerous.”

Unwittingly, AI robots are contributing to the American fake news crisis that has deteriorated the public’s trust in traditional media especially since 2016, Hill said.

What’s most dangerous is the sheer number of iterations of the Miller story that contain false information.

“What’s new here is the speed and persistence of this fake news,” Hill said. “You can dismiss it, but you see it again. You see it enough times and you start thinking it’s true.”