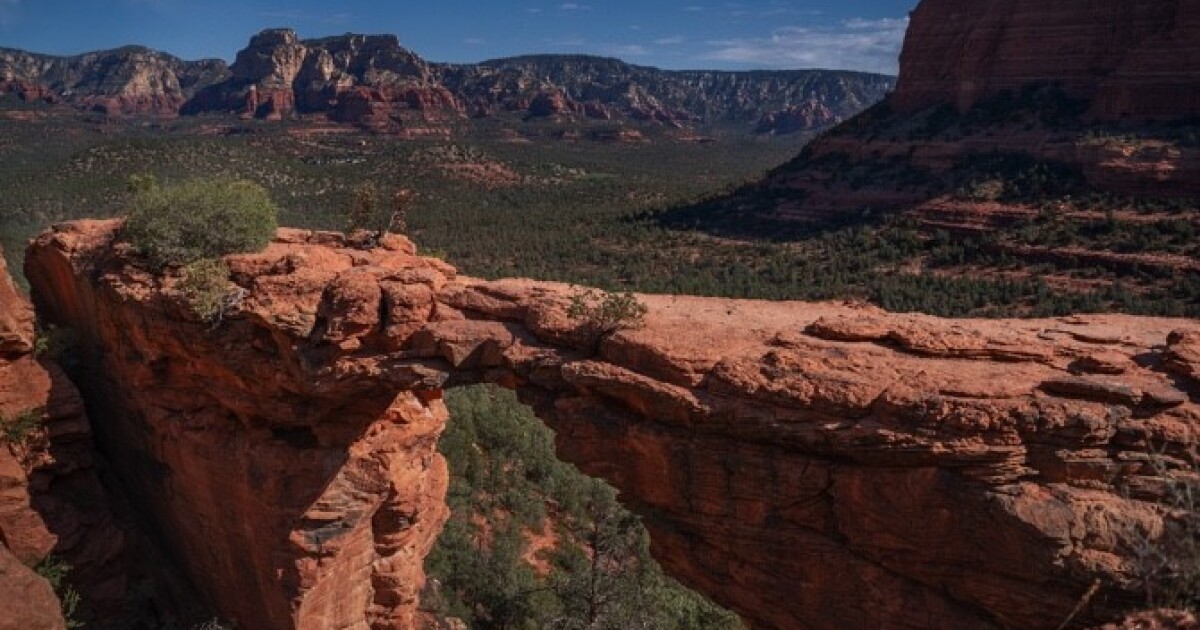 SEDONA, Ariz. (KGUN) — The red rocks of Sedona attract visitors from around the country and world.

The scenery is unmatched. So is the story behind the name Sedona.

She is a Tucson native and a direct descendant of one of the first families of Sedona.

Today, Sedona is a very busy town often times overflowing with tourists. Three million visitors a year, according to tourism officials. They’re all taking in the awe-inspiring views of the gorgeous red rocks.

To better understand Sedona, you have to go back more than 100 years, to a small town in Missouri. That is where Sedona Miller met her future husband T.C. Schnebly.

“The better part of Gorin, Missouri, was Methodist,” recalled Heidenger. “T.C. Schnebly was Presbyterian. I’m sure that the friction caused by the wrong religion is part of what contributed to them coming west.”

T.C.’s brother, D.E. Schnebly, also contributed to the young couple moving out west. He told them about the beauty of Oak Creek Canyon near Flagstaff.

“You have got to see this place, you won’t believe it,” said Heidinger recounting the words of D.E. Schnebly. “They probably calculated their fortunes weren’t going to stack up too well in Gorin and came out here.”

That was 1901. T.C. Schnebly built a two-story home for Sedona and their two children.

The home eventually became a lodge and restaurant for early tourists.

By 1902, T.C. Schnebly decided the area needed its own post office.

“He was getting the mail in Flagstaff and bringing it down Schnebly Hill Road for the residents,” Heidinger said.

“It was a great deal easier than before there was a Schnebly Hill Road,” explained Heidinger. “It was four days then, he got it down to a day.”

T.C. submitted the names Schnebly Station and Oak Creek Crossing. Both were denied.

“The postmaster general scrawled ‘too long’ in the margins,” revealed Heidinger. “Brother D.E. is with them and says why not name it after ‘Dona. They go yeah. And that’s how it became Sedona.”

Schnebly Hill Road still isn’t much of a road, only accessible by four wheel drive. The scenic beauty of Sedona is accessible from any road in town.

Larry is Lisa Schnebly Heidinger’s father, making him the grandson of T.C. and Sedona Schnebly.

At 93, he’s now retired in Tucson. He still remembers spending much of his youth with his grandparents in Sedona.

The Schnebly name remains a fixture in the town named for his grandmother Sedona.

“It’s not a kind of thing that I can claim and credit for,” Schnebly said. “It’s just a luck of birth.”

“It means a great deal to all of us,” Lisa shared. “I think we’re all impressed. They actually were amazed the name lasted.”

Sedona lives on in other ways as well.

At the Sedona library, there’s a large statue of Sedona Schnebly overlooking the red rocks in the distance. Lisa was the model for the sculptor.

Plus, Lisa has a daughter named Sedona.

“I have a grandmother and a granddaughter named Sedona,” Larry Schnebly said with pride. “It is special.”

Special to us, Larry Schnebly’s 34-year history with KGUN 9.

He worked in the early days of television, doing everything from reading the news, to selling commercial time on KGUN.

“There were 36 people on roster when I first came to KGUN,” recalled Schnebly. “I think there are that many now in the News Department alone. At least that many.”

Lisa also worked at KGUN, as a reporter and anchor. She has written several books on Sedona, as well as the official Arizona Centennial book in 2012.

There is also a layer within the Sedona red rocks the U.S. Geological Survey named The Schnebly Hill Formation. It’s an incongruity of sandstone that the Grand Canyon doesn’t have.

You may occasionally hear Lisa and Larry pronouncing the name See-doh-nuh.

“Larry’s Dad Ellsworth was rigorous in that, ‘Her name was See-doh-nuh,'” explained Lisa. “He was a school teacher, and they know everything. So he corrected anybody. When my parents met at what’s now NAU, he mentioned he was going to See-doh-nuh for the weekend. Mom assumed he was a cool California kid. She said, ‘We say Suh-doh-nuh.’ She was a Winslow girl. He said. ‘It’s named for my grandma and we say See-doh-nuh.'”

Whether you pronounce it Suh-doh-nuh or See-doh-nuh — it’s still one of the most beautiful places in the world.

——-
Pat Parris is an anchor and reporter for KGUN 9. He is a graduate of Sabino High School where he was the 1982 high school state track champion in the 800 meters. While in high school and college, he worked part-time in the KGUN 9 newsroom. His father, Jack Parris, is a former general manager of the station. Share your story ideas and important issues with Pat by emailing pat.parris@kgun9.com or by connecting on Facebook, Twitter, and Instagram.