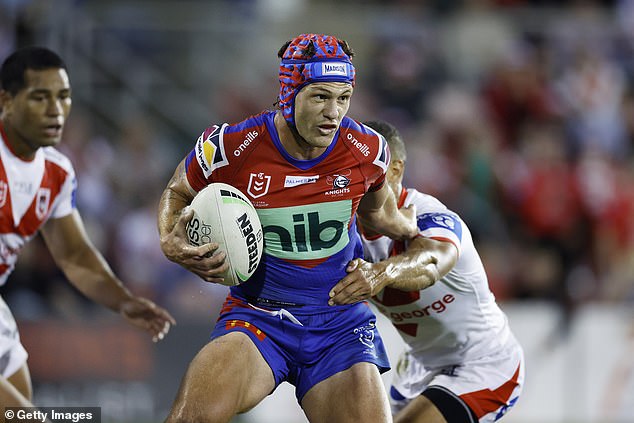 By Dan Cancian For Mailonline

NRL clubs have been left puzzled by the ongoing power struggle in Newcastle, with at least one coach and CEO reportedly expecting the Knights to put table a new offer to Kalyn Ponga.

On Easter Sunday, the Daily Telegraph reported the Knights had surprisingly withdrawn an extension offer, which would have kept the star fullback at the club until 2027.

Ponga, the Knights captain, was set to sign a three-year deal worth $1.1million per season. The offer, however, was sensationally pulled on Friday amid suggestions certain Knights executives became uncomfortable over the influence Ponga’s father Andre appears to have gained at the club.

Andre allegedly wanted to control when the new deal would be made public, taking the decision out of the club’s hands. Newcastle were said to want to announce the new deal last week, only for Ponga’s father to insist the club hold fire.

While a final decision will be made once Knights CEO Phil Gardner returns to Australia next week, a new report from the same outlet suggests the club is now split with some executives wanting to table a new deal for Ponga and other believing it’s time to part ways with the Queenslander.

Speaking to the Daily Telegraph, an NRL coach suggested the Knights wanted to curtail the influence Ponga’s father appears to wield but suggested Newcastle may table a new offer to their captain.

The star fullback was set to sign a three-year deal extension worth $1.1million a season

‘I reckon the club wants to take back some control. It seems Kalyn and Andre have a lot of influence at the club,’ he was quoted as saying.

‘You’d think it would come to a head and get sorted. If that happens, I reckon the offer might be back on the table but who knows? Do Newcastle have the gumption to offload Kalyn?’

An NRL CEO echoed the thought, noting however he did not think Newcastle would be brave enough to pull the offer.

‘Kalyn and his dad have some sway at the club. I wouldn’t be surprised if they put it back on the table,’ he said.

Ponga has until Round 10 to trigger an option for the remaining two years of his existing deal.

However, if he chooses to ignore it, he could walk away at the end of the season.

That would leave him free to join the Dolphins, who have long been admirers of the fullback and are desperate to secure a marquee signing for their inaugural NRL season.

Earlier this month, Ponga met with Dolphins coach Wayne Bennett in Sydney, fuelling speculations he could move north of the border.

However, he subsequently appeared determined to stay put in Newcastle and looked set to pen a new deal with the Knights, the club he’s been at since 2018.

‘I don’t believe it. Simple as that,’ Johns told Nine.

‘The Knights want to keep Kalyn at all costs. I know there is a process at the moment.

‘We all know the Dolphins are chasing him. I just simply don’t believe it, I don’t think the Knights would pull that extension.’