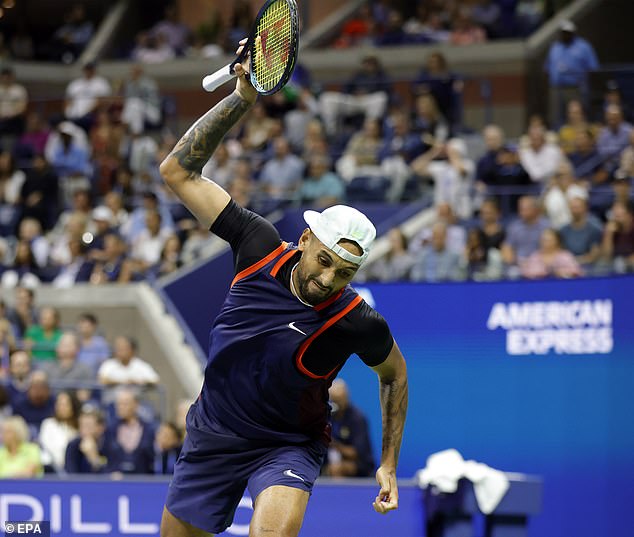 Nick Kyrgios smashes up TWO rackets after losing to Karen Khachanov in a US Open five-set thriller, having told his corner ‘I don’t want to play with this s***’ in a timeout with a knee issue

By Mike Dickson for MailOnline

Nick Kyrgios went out of the US Open with less of a bang and more of a whimper as he succumbed to the brutish power of Karen Khachanov.

Initially troubled by a knee issue – and perhaps ruing the decision to play doubles here – he never quite ignited and sometimes looked subdued in a match dominated by serve that saw 61 aces almost evenly split.

Moments after his defeat, Kyrgios shook hand with Khachanov and smashed his racket up

It appeared a great tournament for Kyrgios to win, the draw having opened up for him

It has been a transformational summer for Kyrgios, but this was a deflating ending, despite him battling to the end when previously he might have folded.

With no previous champion in the field it was an excellent opportunity for him to join the ranks of Australian Major winners.

Instead the strapping and slightly mechanical Khachanov, who held his concentration admirably, will now face Norway’s Casper Ruud for a place in the final.

Kyrgios moves with a strange gait at the best of times but there was something definitely less animated about him as the first set rattled away at lightning pace.

Amid a flurry of aces from both men the first eleven games took just half and hour, before a tight twelfth that saw Kyrgios leave the door ajar for the Russian to get a foot in it.

Then came the call for the trainer, who entered the court to frantically massage what initially looked like either side of the Australian’s left knee.

‘I don’t want to play through this s**t,’ he told his support box in the corner – before promptly playing on and breaking Khachanov in the third game.

It was a gripping match on Arther Ashe, with Khachanov emerging victorious after five sets

He slowly gained the ascendancy and restricted himself to chuntering at the change of ends of what was, in truth, and often uninspiring contest.

His temper snapped when he missed a second break point at 4-4 in the third, hurling his racket away in disgust and screaming some very audible obscenities which umpire James Keothavong chose to ignore.

He eventually dispensed an unsportsmanlike conduct violation for throwing a water bottle.

Kyrgios needed to save two set points in the next game, one of which came from a badly miscued Khachanov forehand as he rushed into the net.

The Russian did not make the same mistake when another two presented themselves in the next game, staying in the rally and winning it when Kyrgios netted a backhand.

With the clock ticking towards midnight the Australian went up a break, only to immediately hand it back with a loose serve game to his dourly determined opponent.

An increasingly boorish crowd – which earlier on had included one man getting a haircut – roared him towards the tiebreak, in which he was always in charge, taking it 7-3.

While the knee looked to have ceased to be an issue, he got off to a poor start in the decider when he was broken, and was left regretting taking only two of nine break points.

As a final act, he furiously smashed two of his rackets into the court after shaking hands.