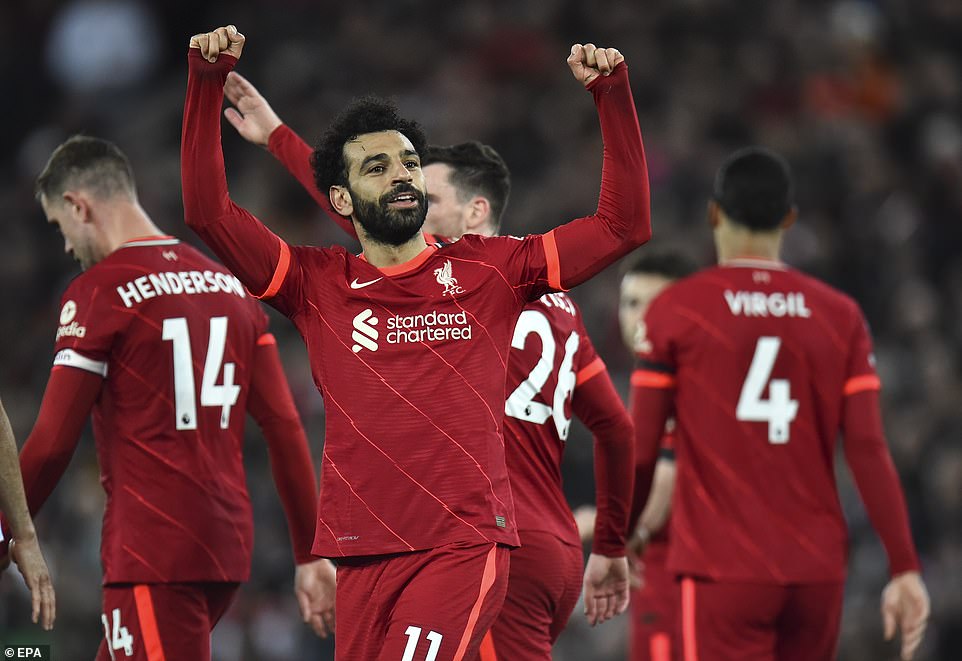 Liverpool 9 Manchester United 0. Not on the night, obviously. That’s an aggregate score, over two league games, another rewriting of the record books, both good and bad.

Good for Liverpool, naturally, having never beaten a club called Manchester United by this margin in one season. They defeated Newton Heath this way in 1895-96, and that club evolved to become the modern Manchester United so, again, it depends on how one views history.

Still, green and gold is increasingly popular around Old Trafford these days, so maybe this was the United’s players own tribute to it. As for the modern era, no team has ever put eight past United in two Premier League matches, let alone nine – and that includes the Manchester City team that won 6-1 at Old Trafford in 2011-12. They only won 1-0 in the return.

So five away, four at home, and we all know it could have been more. The greatest insult on the night was that Liverpool handled United like lower table inferiors for much of the game, having gone two goals clear with less than a quarter of the match gone. Had United pulled one back, and there was very little chance of that, there was the feeling Liverpool could have scored again to plump up their cushion. That was certainly how it looked for the third, after 68 minutes.

United had been enjoying their best period of the game, which is a bit like being considered the smartest mind on the government front benches or the least irritating member of Just Stop Oil, mostly through the arrival of Jadon Sancho as a half-time substitute, when Liverpool simply cut through them and put the game to sleep.

Andy Robertson spotted a pass out to his flank, intercepted it and put Luis Diaz in on the left. What a signing he has turned out to be. He struck a cross which picked out Sadio Mane in the sort of space that would suggest Manchester United’s defenders are still observing social distancing and he shot smartly on the turn leaving David de Gea no chance.

Simply, United were just picked off too easily. With five minutes remaining, Robertson again, intercepting a pass from substitute Hannibal Mejbri and swiftly feeding Diogo Jota. His lovely floated ball picked out Mo Salah who dinked it past De Gea for his second of the night, and a timely return to goalscoring form. In their last three meetings, Liverpool have now scored 13 goals against United, so no wonder many in the away end took the opportunity to beat the traffic to the M62. This game was lost almost before it begun.

Lord, it was easy for Liverpool. Disgracefully, embarrassingly easy from Manchester United’s point of view. It wasn’t just the gallop to a two-goal lead just 22 minutes in, but the whole tone of the game. Mere minutes had elapsed when Alisson, in Liverpool’s goal, turned Bruno Fernandes, the way Fernandes would hope to turn a Liverpool defender, but didn’t, not once.

This is worrying in the extreme for United. Whatever the circumstances, this game always used to be a battle. An inferior United team would always have a swing at knocking Liverpool off their perch; Liverpool never gave in to the idea that Sir Alex Ferguson’s team were their superiors, even when they were winning trebles. Times have changed. This United team don’t put it up to Liverpool anymore. It is argued they don’t try. Maybe they are just incapable. Certainly, they didn’t look as if they had it in them to prevent a Liverpool win.

Midway through the first half, Alisson hit a counter-attacking pass to Diaz on the left, quick and accurate, that was better than anything played by a United man all game. Too often forward passes were panicked, overhit.

Paul Pogba lasted 10 minutes before limping off injured – given his relationship with the club and his form, it may be his last appearance in a United shirt, and about as memorable as many of the others – and in that time hit one truly dreadful aimless forward ball that summed up United’s sloppy attitude. At one stage, Victor Lindelof was begging Aaron Wan-Bissaka to make an angle as he was trapped with two Liverpool players on him, but the wing-back did not want the ball. So it went to a Liverpool man.

Liverpool have so much more about them. Wit, intelligence, work ethic. In the opening 45 minutes they made 438 passes to United’s 144, 401 successful to United’s 92, and Thiago Alcantara alone made 60 passes, all but one finding its target. There is not a single United player that would get into this Liverpool team, and it showed.

However, that early second-half momentum was quickly crushed by Liverpool when Sadio Mane (left) scored their third goal

The opposite fixture in October swiftly escaped United’s grasp, becoming one of the results that hastened Ole Gunnar Solskjaer out of the door, but Liverpool’s first goal here was actually three seconds faster than on that occasion.

It was a lovely, quick move, typical Liverpool. Mane whipped it out to the right, and Salah beat Trent Alexander-Arnold to the ball – that was the foot race, United didn’t seem to have a man entered – and his cross was met by Diaz, ahead of any defender to push the ball past a helpless De Gea.

That was his third goal in eight matches since signing: left foot, right foot and header. Another triumph for the recruitment department; another facet of the game Liverpool make look easy by comparison to United. When Liverpool scored again, the move that encapsulated what they have got, and what United are missing.

The move consisted of 25 passes, between 10 Liverpool players, including Alisson in goal. Only Virgil van Dijk was not involved. The final exchanges, though, were conducted at lighting speed. Joel Matip to Diaz, back to Matip, to Mane and threaded through beautifully to leave Salah one on one. He last scored on March 12 at Brighton, and at Anfield on February 23 against Leeds, but he took it like he was on one of his famous hot streaks. There was no way he was going to miss.

United have conceded more goals this season than Burnley, in 18th and without a manager. What an indictment that is. And what an indictment for the great technician Ralf Rangnick that he watched Liverpool take Manchester City apart on Saturday, and ended up with a defence that left Lindelof against Luiz, and restored Phil Jones as a battlefield promotion. This is a club running on fumes, intellectually.

It was also a Manchester United side without the grieving Cristiano Ronaldo – and a touching tribute was paid by all sides of the ground after seven minutes – but as always no-one took the opportunity to fill his shoes.

Manchester City manager Pep Guardiola said he would be watching and won’t have liked what he saw. He can hardly have been surprised, however. There was little chance of this United doing Manchester City any favours – even if they wanted to.