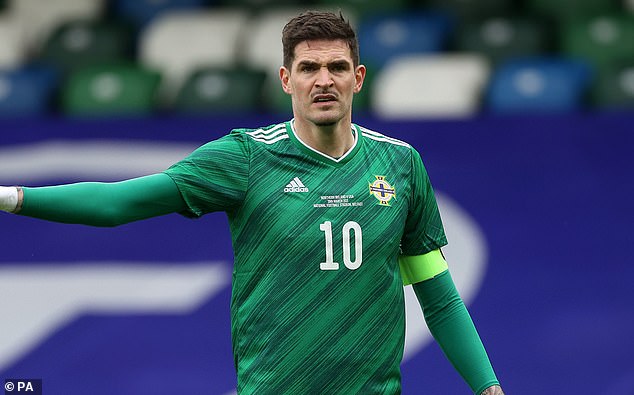 By Chris Wheeler for MailOnline

Kyle Lafferty has been axed from the Northern Ireland squad after a video of him using sectarian language appeared on social media.

When a Celtic fan posing with Lafferty on the video shouts ‘up the Celts’ into the camera, former Rangers striker Lafferty responds by calling him a ‘Fenian b*****d’.

Lafferty’s current club Kilmarnock have launched an investigation and Northern Ireland announced that he has been withdrawn from their squad for the Nations League games against Kosovo in Belfast (on Saturday) and Greece in Athens on Tuesday.

The 35-year-old, who was struggling with a back injury anyway, now faces an uncertain international future but manager Ian Baraclough insisted that the door is still open for Northern Ireland’s second-highest scorer.

‘It’s not necessarily the end,’ said Baraclough. ‘A manager’s role includes being a father figure and someone they can turn to. That relationship will still be there.

‘Clearly it’s something we would rather not be talking about. The squad are aware of the situation. Kyle is a popular figure within the group and everyone will rally around him.

‘There has been a lot of cross-community work put in by the IFA and that is so important for this country going forward.

Northern Ireland have never won a Nations League game in 14 attempts and are at risk of dropping into pot five for the Euro 2024 qualifying draw if the next two results go against them.

Lafferty’s 20 goals for Northern Ireland make him the second-highest scoring men’s player in the nation’s history behind David Healy.

The 35-year-old spent two separate spells at Rangers earlier his career and in 2011 he was subjected to sectarian abuse after he had his car window smashed at a petrol station near Glasgow.

He joined Kilmarnock from Cypriot side Anorthosis Famagusta in January and the Scottish Premiership club released a statement on Thursday after the video of Lafferty started to circulate online.

‘Kilmarnock Football Club are aware of a video circulating online which appears to show a member of our playing staff using language of a sectarian nature.

‘The club finds all forms of discriminatory behaviour completely unacceptable. The matter will be investigated by the club.’