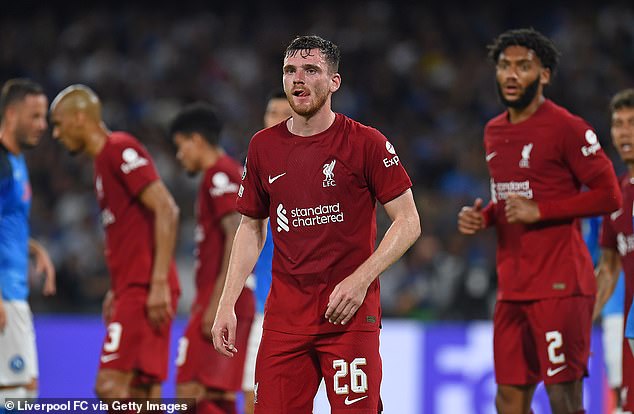 Jamie Carragher lambasted Liverpool after their 4-1 Champions League defeat to Napoli, likening the team’s defending to ‘suicide football’ and criticizing the team’s transfer activity in the summer.

Jurgen Klopp‘s side were torn apart in the first half of their Champions League opener, going into the break 3-0 down before Luis Diaz scored a consolation goal in the second period.

And after an underwhelming start to their Premier League campaign, with just two wins from their opening six matches, Carragher is concerned that Wednesday’s battering is emblematic is something larger.

Jurgen Klopp’s men were handily beaten in Naples, getting off to a nightmare start in Europe

‘The problem tonight is not that game. Forget this game,’ he said on CBS after the match.

‘For me the big worry is that, ‘is this almost something that’s going to carry on through the season? Is this an end of a cycle?

‘Liverpool massively got the transfer ideas in the summer wrong because this team is so far off and it has been at full pelt for five or six years.

‘Is this a massive drop off physically because of what’s happened over the last five or six years the way they’ve played, how intensive they’ve been. And can this team get it back?’

Liverpool splurged on striker Darwin Nunez and also brought in attacker Fabio Carvalho over the summer.

But they waited until the end of the window to bring in midfielder Arthur Melo, who was hurriedly signed amid injuries to Jordan Henderson, Thiago Alcantara, Alex Oxlade-Chamberlain and Naby Keita.

Klopp had previously said the club didn’t need a new midfielder, but admitted he was wrong towards the end of August.

‘It’s embarrassing. It really is,’ Carragher said of Liverpool’s defending.

‘I said before it’s kid stuff and this is the big problem with Liverpool right now. They’ve built their success on intensity on the ball, which means the opposition can’t get the head up to put the ball over.

‘So your team’s always tight. Always really compact .At times [there’s a] risk, but you get an energy on the ball, that energy is not there now, so that back four has to adapt and it has to go back three or four yards.

‘That’s all we’re talking about. But if they keep playing [like that] they’re gonna have a big problem in terms of the Premier League this season and qualifying for the next round of the Champions League, because that is suicide football.’

Napoli enjoyed a famous 4-1 win at Liverpool’s expense, with Rangers up next for them

Carragher also singled out right back Trent Alexander-Arnold, who was skipped past before Napoli’s third goal and caught out of position for the fourth.

Despite being a gifted passer, the Englishman has endured a patchy few months on the defensive end, most notably falling asleep for Vinicius Junior’s Champions League final winner last May.

And that form seems to have bled over from last season.

‘The thing with Trent is I’ve always said this that he’s not a conventional fullback. He’s not great defensively. He never will be,’ Carragher said.

‘But he’s got strengths and talents that we don’t normally see from a fullback. He’s Liverpool’s playmaker, but I’ve always said I thought [these defensive struggles] would come with another manager.

‘When Liverpool stopped being one of the top teams in the Premier League or Europe. That means they will defend more, they will have more nights like this. And his defensive deficiencies will stand out more and we’ll see less of him on the ball.

‘That might be a time where he has to go into midfield. When you’re in a Jurgen Klopp team, you normally dominate the ball, dominate the play.

‘But when you see him under real pressure, his defensive problems will stand out even more and that’s the big problem for him right now. I thought that might come with the next manager but the problem is it’s coming right now with Liverpool.’

Liverpool will be home for their next two Champions League matches, with Ajax and then Rangers coming to Anfield.

The Reds sit in third place of Group A after one matchday, besting Rangers on goal difference.