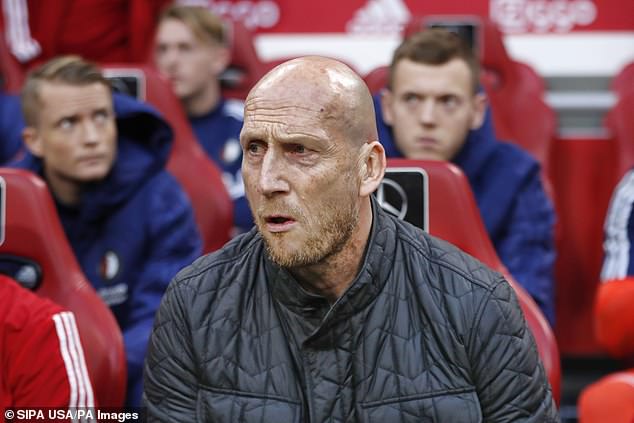 Manchester United legend Jaap Stam has warned incoming boss Erik ten Hag about ‘the pressure’ at Old Trafford – and says winning the league is an expectation at the club.

Stam, who won three Premier Leagues, an FA Cup and a Champions League under Sir Alex Ferguson, also told the current Ajax coach about the difference in standard between Dutch and English football.

The 49-year-old sent the message ahead of ten Hag’s Dutch Cup final against PSV Eindhoven on Sunday – as the Dutchman aims to complete a hat-trick of domestic trophies.

According to the Sun, Stam said: ‘The pressure at United is much greater. The club management can be patient but that does not mean you get time from the outside world.

‘The title and the Champions League are expected. That is no different under a new coach.’

The former United player argues that the ten Hag will be expected to win the Premier League in his first season – despite the club not lifting the trophy since the 2012/13 season.

Stam, who ended his playing career at Ajax, has also warned the incoming boss about ‘a world of difference’ between the Eredivisie and the Premier League.

Stam said: ‘Something has to change but you cannot say, ‘These 15 must go and these ten remain’. There are many large contracts. But some changes are crucial for a breath of fresh air and success.

‘It becomes difficult if they do not fit into your system. That is why a trainer is required who is demanding and who says in detail what needs to be done.

‘There is a world of difference between the Netherlands and England.

‘Ajax has by far the largest budget in the Eredivisie. But there, a trainer is mainly judged on European competitions.

‘In England there are three high-level matches every week, with good players at every club and sometimes you have to change the way you play.’