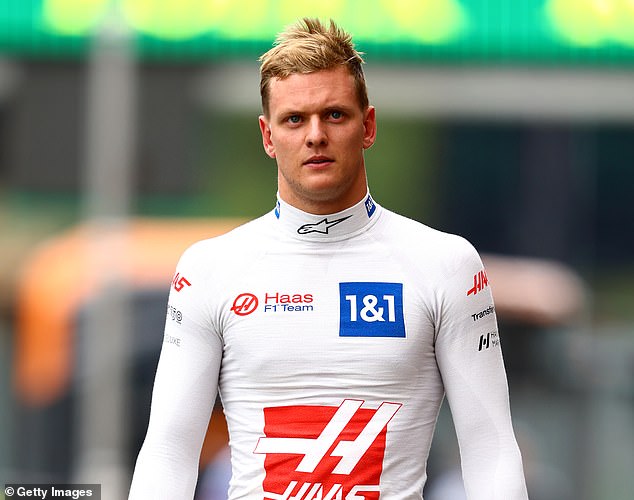 By Jonathan McEvoy for the Daily Mail

Mick Schumacher is facing the sack from American team Haas, meaning the famous family name is unlikely to be on the Formula One grid next season.

The German’s contract expires in December and talks over an extension have gone nowhere.

Haas have instead installed Nico Hulkenberg, Schumacher’s 35-year-old compatriot, as their No 1 target after he impressed as a Covid super-sub, scoring in two of his four appearances for Racing Point/Aston Martin when he filled in for corona-stricken drivers.

Hulkenberg brings the experience of 181 starts mostly racked up before he left Renault in 2019. He also enjoys a good relationship with Steiner.

As for Schumacher, he has scored just twice – in Britain and Austria this year after a crash-strewn early season – since making his Formula One debut in 2021.

Mick’s popularity in Germany is built on his father’s status, though the loyal son has never spoken about Michael’s condition following the terrible head injuries he suffered while skiing on the Alps in December 2013.

Mick asked to be known by the abbreviation ‘MSC’ on the timing screens, rather than the ‘SCH’ he would ordinarily have been allocated. It was an echo of his father’s ‘MSC’ which was used to distinguish him from his brother Ralf.

There remains a slim chance Mick will win a reprieve, with Alpine requiring a replacement for Fernando Alonso, who suddenly announced his decision to join Aston Martin next season.

Frenchman Pierre Gasly was earmarked for Alonso’s seat but only if IndyCar race winner Colton Herta took up Gasly’s slot at AlphaTauri. And that is not happening.

For, despite Herta’s success across the Atlantic, he does not possess enough super licence points to compete in F1, and his pursuers have called off the chase – a fact confirmed on Friday by Red Bull’s motorsport director Helmut Marko.

Although a fluid market offers Schumacher hope, one paddock source said it would take ‘a miracle or two’ for him to feature on the F1 grid next season. A reserve role is more probable.