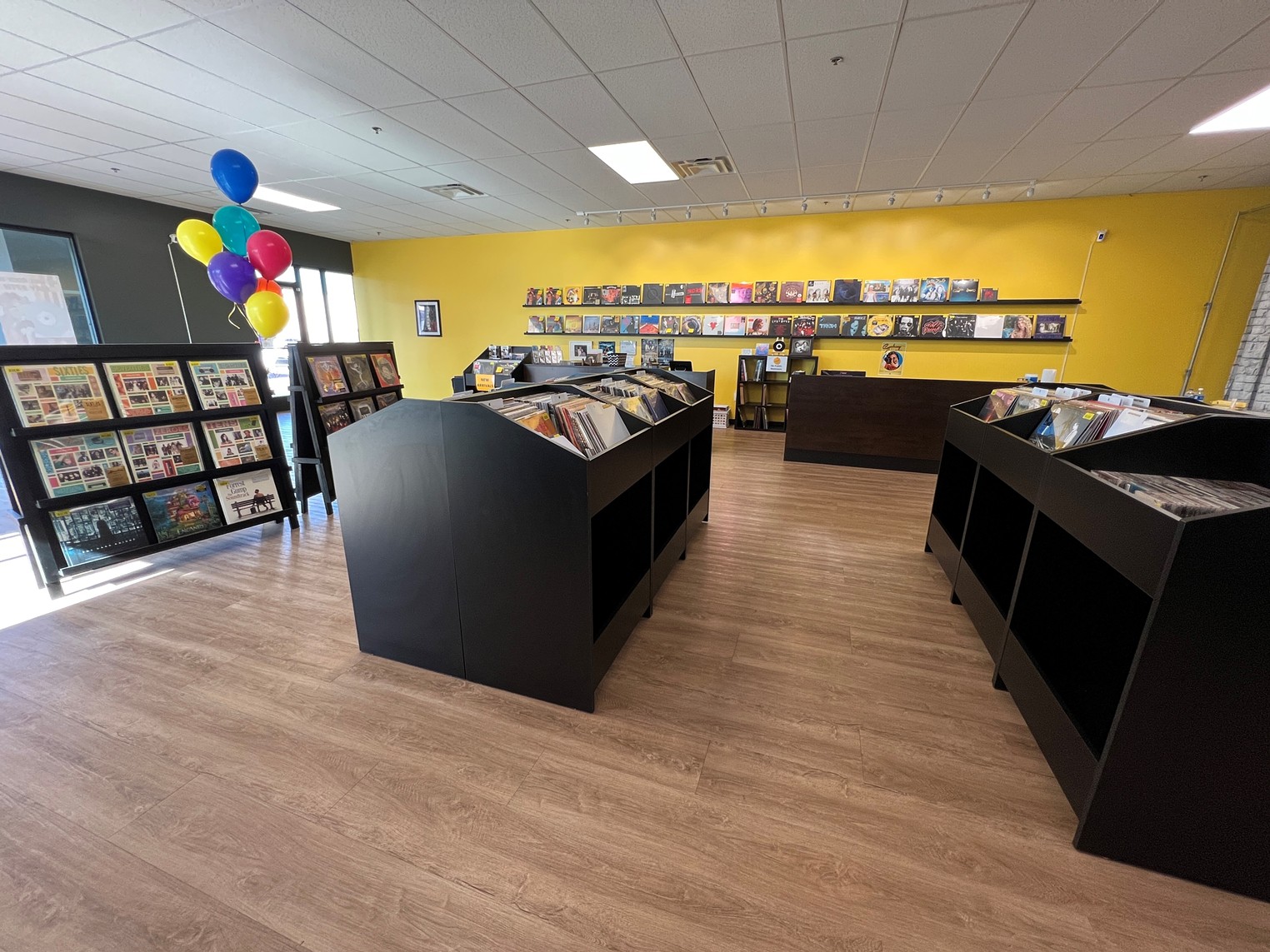 Rock This Town Records in Gilbert has plenty of room to grow.

I’m not sure why, but I’ve never associated the town of Gilbert, a suburb of Phoenix and a neighbor of Mesa and Chandler, with record stores.

This changes, though, with the addition of Rock This Town Records to the Valley vinyl landscape.

Open for roughly two months, Rock This Town Records is on the north side of Warner Road and just west of Lindsay. Located at 732 East Warner Road, #101, in Gilbert  to be exact, the comfortable and truly welcoming store is easy to miss if you aren’t sure what you are looking for or listening to the little bossy lady in your phone.

Owned by Jenn and Malcolm Michaels, Rock This Town Records is to be a labor of love. The store is well appointed and has a really nice collection of new and used records, used CDs, and a good assortment of turntables. Most recently, the store included an excellent selection of both new and vintage rock and roll T-shirts, too.

“People like the store. We get a lot of younger people, a lot of kids starting out building their collection, and a lot of people like me who are collectors. We want to host events and just be friendly and welcoming,” says store manager Jeff Hutton.

One of the great things about Rock This Town Records is the pricing. While they’re not noticeably cheaper than their larger or more well-established counterparts in town, they have a wonderful selection of $3 LPs and 7” singles priced at $1, $2, and $3.

The store takes in merch for cash or trade, so if you have a collection you’re looking to unload, you’ll be well-treated by Hutton, who brings a wealth of knowledge and enthusiasm to his job. An Orange County transplant, Hutton is excited to bring more activity to the east valley music scene.

During our conversation, Hutton referenced Michael Pawlicki’s Ghost of Eastside Records as sort of a standard bearer by which he hopes Rock This Town Records can learn from and aspire to be. While the new store has a long way to go in terms of developing that sort of reputation, I do hope they can cultivate a similar aura of expertise mixed with killer selection.

Currently, Rock This Town Records has a nicely sized collection. There is enough variety to satisfy collectors like myself with diverse tastes, but not so much that you’ll feel as if you missed out on a rare gem because you didn’t take the time to comb through every portion of every bin. I was very impressed with the quality of the lower-priced used records, for example, and found some real gems at the $3 rate.

Just one of the many cool records found at Rock This Town Records in Gilbert.

For example, I scored a 1965 pressing of Buck Owens and His Buckaroos LP, I’ve Got A Tiger By The Tail, for $3. For a sometime-DJ like myself, getting a near-mint barn burner like this at this price is a steal. The next time I spin, you can bet on hearing a song from this record.

A sucker for soundtracks, I also found a mint copy of the Pat Metheny Group’s soundtrack for the Timothy Hutton/Sean Penn classic, The Falcon and the Snowman (1985). This beauty was $5 and features the killer song, “This Is Not America” with David Bowie on vocals. Another fun one to play around with at a party, for sure.

My score also included a live Joan Baez, some Gordon Lightfoot, Ray Charles, Ella Fitzgerald, Duane Eddy, and a 12” Flock of Seagulls single for “Telecommunications.” I also picked up a small stack of 7” records I won’t bore you with, but the prices were definitely right.

For those of you looking for the latest and greatest releases, Rock This Town Records has what you are looking for, as well as some nice, rare selections on the wall. I’ve got my eye on an OG English pressing of The Damned’s Machine Gun Etiquette, but I don’t know if the copy I already have would get jealous. You can never have too many copies of a record like that, and I’m sure the fine folks at Rock This Town Records understand exactly what I mean.

As a central Phoenix guy, I will most assuredly make my way out to Gilbert again when I am ready to do some record shopping. I highly recommend y’all do the same.