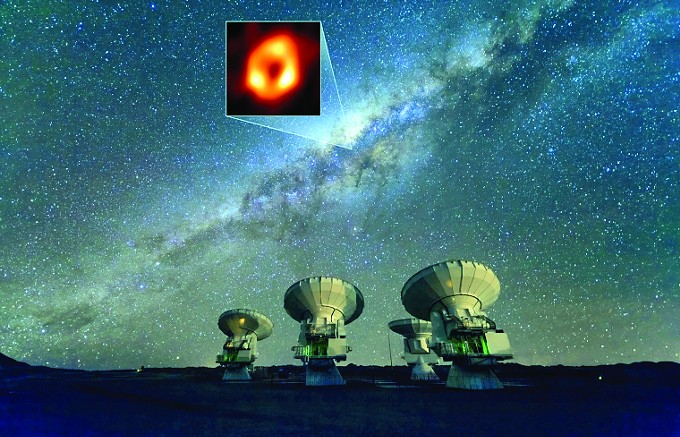 The Milky Way above the Atacama Large Array, a network of radio telescopes in Chile that is part of the Earth-sized Event Horizon Telescope. The insert shows the donut-like image of the black hole Sgr A* at its location in the constellation of Sagittarius.

On Thursday, May 12, people across the world set their eyes on the first ever image of the black hole at the center of the Milky Way galaxy. This image was the result of an international scientific collaboration called the Event Horizon Telescope, and marks the most significant finding in all of astronomy — at least since the last time the Event Horizon Telescope team imaged a black hole.

In 2019, the Event Horizon Telescope gained worldwide fame by unveiling the first image of a black hole: the Messier 87* black hole some 50 million light-years away. Now, they’ve revealed the second black hole ever directly imaged, Sagittarius A* at the center of our galaxy, which is 26,000 light-years away.

Multiple Tucson-based astronomers and scientists work on the Event Horizon Telescope team through the University of Arizona. In total, the collaboration involves more than 300 scientists and 80 institutions around the world.

“Until now, we didn’t have the direct picture confirming that Sag. A star was indeed a black hole,” said Event Horizon Telescope science council member Feryal Özel, a UA professor of astronomy and physics. “This image shows a bright ring surrounding the darkness: the telltale sign of the shadow of the black hole. Light escaping from the hot gas swirling around the black hole appears to us as the bright ring. Light that is too close to the black hole, close enough to be swallowed by it, eventually crosses its horizon, leaving behind just the dark void in the center.”

This second black hole image looks very similar to the original black hole image: a blurry orange ring within the blackness of space. Özel says they look similar because they are the outcome of the same fundamental rules of physics.

By their very nature, black holes do not emit light. So the image is not of the black hole itself, but of its absence as it distorts the light around it. The Sagittarius A* black hole is estimated to be 4 million times the mass of our sun.

“The fact that the light appears like a ring, with the black shadow inside, tells you it’s purely gravity,” said astronomy and physics professor Dimitrios Psaltis in a UA release. “It’s all predicted by Einstein’s theory of general relativity, the only theory in the cosmos that does not care about scale… Wherever we look, we should see donuts, and they all should look more or less the same.”

The Event Horizon Telescope is not a single telescope, but a network of telescopes across the world that combine their information to produce these images. Current locations include observatories in Arizona, Spain and Mexico.

“If you looked at the source one day versus the next, or one year versus the following year, how would that change, and how much light would it emit in different wavelengths?” Özel said in a UA release. “What could we predict about that? And how could we use our observations to understand that black hole’s environment?”