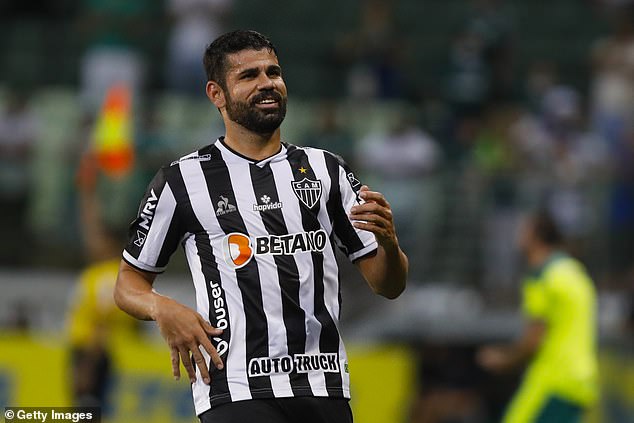 By Dominic Hogan For Mailonline

Diego Costa will be given precious little time to enjoy his recent arrival at Wolves, as he is set to be sent on his own mini pre-season after his return to English football.

The Brazilian-born Spanish striker is set to be announced as a Wolves player in the coming days, having signed a one-year deal at the club, but will be put on his own regimen of fitness training in order to be brought up to speed.

Although he is yet to play in competitive football in 2022 after leaving Brazilian champions Atletico Mineiro in January, Costa could be in line to start his first game against Manchester City on September 17.

The two-time Premier League winner joins a side who have struggled to put the ball in the back of the net at times this season, managing only three goals in six games and only one win in that time.

Veteran midfielder Joao Moutinho, who has been at the club for four years now, added that the club have been training to improve their finishing, saying: ‘We feel we play good football, we create chances but we haven’t scored sometimes. That’s one of the things we need to improve.

‘That’s what we’re training for every single day, trying to be better or to improve our finishing, to improve everything in our game — and try to put that on the match.

Costa has two Premier League titles to his name, both of which he won during his Chelsea days

‘We know sometimes it’s difficult but we keep going and keep trying to do our best to get the victories for us and for our supporters.’

The former Chelsea frontman has been granted a work permit after his appeal was upheld, with the FA originally deciding to reject his application after he failed to meet the necessary points quota.

And though the 33-year-old may not be the same prolific goalscorer he was during his last spell in England, he will likely have an opportunity against Man City to show that he can put pressure on Raul Jimenez for a starting role up front.

And Wolves fans will be glad to see the club bring in a striker after summer signing Sasa Kalajdzic suffered an unfortunate ACL injury on his debut against Southampton in what turned out to be Wolves’ only win of the season.

Austrian international Kalajdzic had joined on August 31 for £16.2million, but will miss the majority of the season now following the knee injury.

Sasa Kalajdzic suffered a serious knee injury in his first game after signing for £16.2million