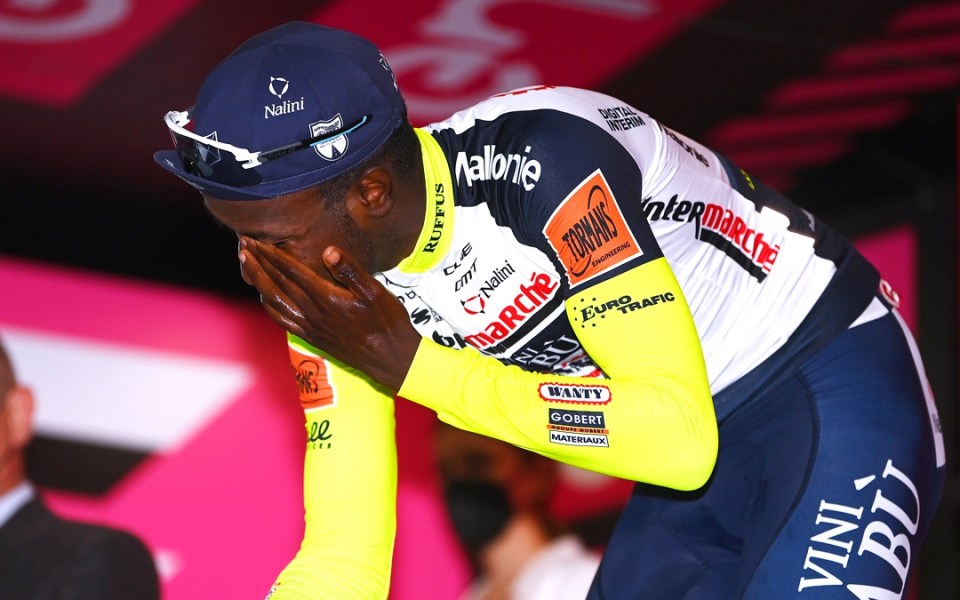 An unfortunate onstage incident has potentially put a devastating end to a young cyclist’s dream run at the Giro d’Italia.

Eritrean cyclist Biniam Girmay, 22, made history on Tuesday (Italian time) when he became the first black African cyclist to win a stage of a Grand Tour.

Girmay wowed onlookers as he outsprinted Dutch ace Mathieu van der Poel to take out stage 10 of the Giro d’Italia in the historic Italian town of Jesi.

But it took an unfortunate turn when he took to the podium to celebrate his historic victory. As he prepared to spray a magnum of prosecco, the bottle’s cork popped while he was unwinding the foil, with the exploding cork striking Girmay’s left eye from close range.

The cyclist appeared to recoil in shock, holding his eye socket in pain.

He was taken to a local hospital for medical checks, and was reportedly unable to see out of his left eye after the incident.

“We immediately came to the hospital of Jesi, here he was treated well. He had a bleeding in the anterior chamber of the eye. Such bleeding is not threatening to the eye itself, but it is important that this is monitored.”

Even after Girmay was discharged from hospital, photos showed his left eye heavily bandaged. But, on a happier note, his team later shared a photo of the cyclist back with his teammates, finally raising a glass to his victory.

Despite Girmay appearing high spirits even after the accident, his unlucky injury could potentially put a devastating end to his immaculate run at the Giro d’Italia.

His historic stage victory follows five top-five finishes so far in the 2022 race. Shortly before the accident, he said his performance so far was “unbelievable”.

“I thank the team. We started the race well, we controlled it. I don’t have any words for my team,” he said.

“When I started the Giro we had the possibility to win and make good results – this is also part of the success of our team, my family and everybody. Every day comes new history so I’m really grateful and happy that I did it.”

Girmay’s team will decide on Wednesday morning (local time) if he can continue, only hours before stage 11 gets underway.

The state is a flat 203-kilometre stretch from Santarcangelo Di Romagna to Reggio Emilia. The race ends on May 29 in Verona.