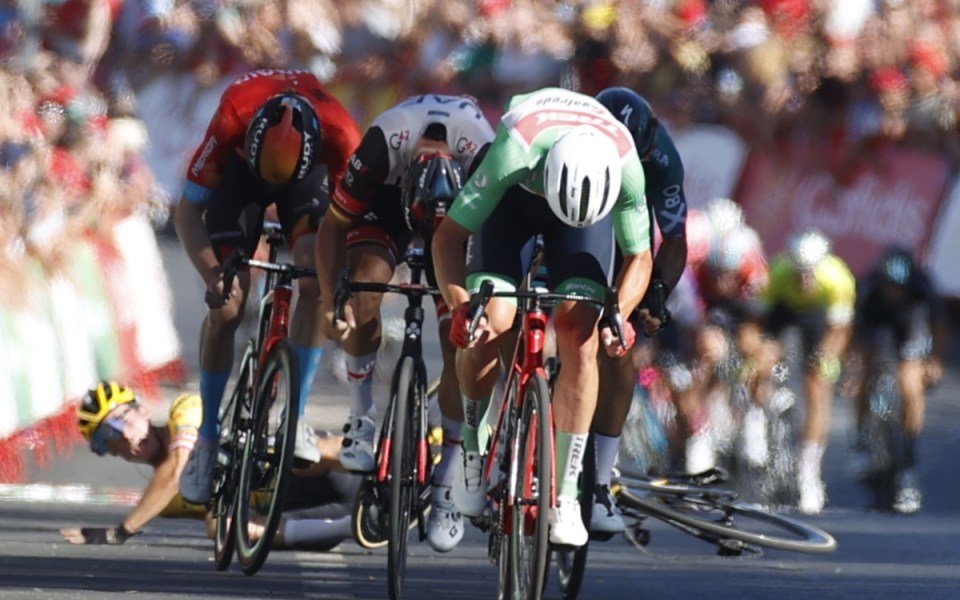 Primoz Roglic’s quest to win an unprecedented fourth-straight Spanish Vuelta title is over after he withdrew from the race because of a crash the day before.

“Thank you for all the beautiful moments in this Vuelta,” Jumbo-Visma wrote on Twitter.

“You had ambitious plans for the final days, but sadly it isn’t meant to be.”

Unfortunately, @rogla will not be at the start of stage 17 as a consequence of yesterday’s crash.

Get well soon, champion! Thank you for all the beautiful moments in this Vuelta. You had ambitious plans for the final days, but sadly it isn’t meant to be. 😔🍀 pic.twitter.com/C3Vnc8P9EO

Roglic went down hard 75 metres from the finish while going for the victory in Tuesday’s 16th stage, crossing the line with bruises and bleeding from his right shoulder, arm and leg.

The injuries did not appear serious but the team and the rider decided it was better not to continue as the race entered the tough final stages.

Roglic had been slowly reducing his gap on overall leader Remco Evenepoel, who now has a clear path to win his first ever Grand Tour race.

The 22-year-old Belgian rider from team Quick-Step Alpha Vinyl had an advantage of one minute, 26 seconds over Roglic.

He is more than two minutes in front of Spanish rider Enric Mas of Movistar, who now is his closest challenger entering the 17th stage.

The three-week race will end after Sunday’s 21st stage in Madrid.

Riders on Wednesday face another difficult test with an unprecedented summit finish at the Monasterio de Tentudía.

The 32-year-old Roglic was trying to join Spanish rider Roberto Heras as the only cyclists to win four Vuelta titles.

Heras won the race in 2000 and 2003-05. Tony Rominger and Alberto Contador are the only other riders with three Vuelta titles.

The Spanish Vuelta remains the only Grand Tour event won by Roglic, whose preparations this year were hindered by a crash at the Tour de France.

The team didn’t know if he was going to participate until a couple of days before the start.

Another title contender who had to drop out of the race was Simon Yates, who last week was among the many riders who withdrew because of a positive coronavirus test.