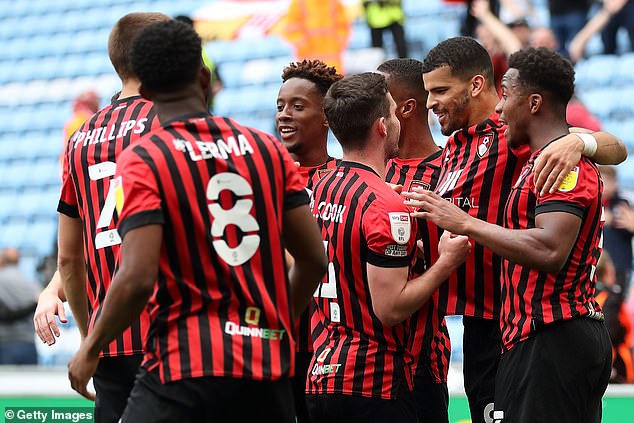 By Janine Self for MailOnline

Normal service is resumed. Free-scoring Bournemouth have rediscovered the way to goal and striker Dominic Solanke is back doing what he does best.

A tricky test at Coventry City turned into a masterclass in the art of breaking away, although Scott Parker will know his team were given a let-off as the home side squandered more than enough chances to have done some serious damage.

The Cherries made the most of it, consolidating their second place in the Championship and setting themselves up for the humdinger against leaders Fulham this week.

For that, Parker can thank Jamal Lowe and two-goal Solanke, whose personal goal drought of three games matched that of the team. He really is their talisman having played every game this season.

One of the things going for Coventry boss Mark Robins is the ability of his side to rise to an occasion. The Sky Blues have an enviable record against the best teams in the Championship.

As well as thrashing Fulham twice, Coventry had not lost against Bournemouth, Sheffield United, Huddersfield or Blackburn. Luton are the notable exception have done the double including a 5-0 blitz.

Robins threw down the gauntlet to the fans after the 4-2 win at Birmingham City on Good Friday and they turned up in their droves to support a team have a last-gasp go at the top six.

They would have been delighted at the way the match started. Todd Kane was a master of motion while Callum O’Hare and Viktor Gyokeres were foraging for openings.

When Gyokeres did find space after a powerful run, his shot across goal was just sent a whisker wide of a post by keeper Mark Travers.

There was only one side in it so what happened? Bournemouth took the lead. Jaidon Anthony’s backheel found Adam Smith, who crossed and there was Lowe to grab the opener.

What a relief for the Cherries. A typical case of the jitters has struck them down in recent weeks. Not only have they drawn two and lost one of their last three, but they have not scored in those games either.

Solanke, with 25 goals to his name, had failed to net and the tremors have been felt throughout the team.

His goal, on the stroke of half-time, was not an award winner and took a huge deflection after he was played in by Jefferson Lerma but no-one from Bournemouth will be grumbling.

Coventry, on the other hand will be furious with themselves. By far the better side – proven by keeper Travers time-wasting within half an hour of the match – they paid for some costly misses.

O’Hare, fed by a through ball from Gustavo Hamer, had a shot blocked by Travers and there were still signs of belief in the Sky Blues ranks. Then the killer blow.

Solanke raced on to a ball from Ryan Christie and steered a low shot into the corner and in front of the travelling support too.

To give Coventry credit, they battled on and sub Martyn Waghorn’s left-foot volley required an instinctive save from Travers.

What a turnaround for Parker’s team. The blip has come and gone and the Cherries are enjoying Blossom season.