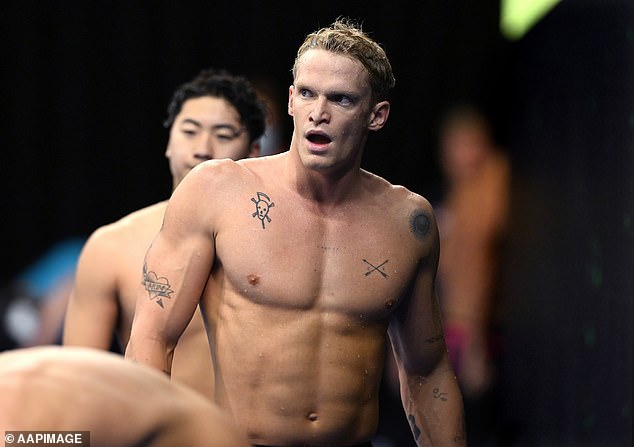 Pop star Cody Simpson is on the verge of earning a shock place at the Commonwealth Games team after a stunning performance at the Australian Swimming Championships.

The 25-year-old took nearly a second off his personal best, qualifying second fastest for the 100m butterfly final in Adelaide on Wednesday night.

Simpson registered a time of 51.79 seconds in his heat on Wednesday morning, behind only Olympic bronze medallist Matthew Temple.

A top three finish in the final would see Simpson sensationally qualify for the Commonwealth Games in Birmingham in July.

Simpson registered an incredible time of 51.79 seconds in his semi-final, behind only Olympic bronze medallist Matthew Temple

Aussie legend Grant Hackett said before the trials he believed it was ‘unrealistic’ Simpson could make the team, but highlighted his incredible progress over the past year.

‘Look, that is still going to be a stretch, but in saying that, it’s not unrealistic, given the times he’s producing,’ Hackett said.

‘I always thought the Olympics team last year was unrealistic, people got carried away with the hype, but I said at the time if he made the final that would be mind-blowing, and he did.

‘This year, getting a medal is something that’s a much higher probability than it was 12 months ago.’

The 25-year-old took nearly a second off his personal best, qualifying second fastest for the 100metre butterfly final on Wednesday night

Simpson, who was a national level swimmer as a child before he followed a career in music, has been training alongside Olympic heroes including Emma McKeon at a high performance centre in Queensland.

Hackett noted the commitment the singer has shown to the support and said he’s a real contender for a place in Birmingham.

‘Cody is 100 per cent committed to the sport and the preparation it takes to get onto one of these national teams and represent Australia,’ he said.

‘We’re going to see a Cody Simpson that is faster and more serious than last year, and more of a contender.

‘It’s now starting to get real for his competitors, that Cody is looking for medals this time around, not just finals.’

Australia’s newest glamour couple: Cody Simpson, 25, and Olympic swimmer Emma McKeon, 27, are ‘completely smitten’ and ‘moved in together in recent weeks’, a new report has claimed. The pair are pictured together on the Gold Coast earlier this month

According to reports, Simpson and training partner McKeon have been ‘secretly dating’ for weeks after meeting while training for the upcoming Comm Games.

‘They are absolutely together. There is no doubt they are an item,’ an insider reportedly told The Daily Telegraph, adding that they have ‘fallen for one another’.

The pair are believed to travel together to training each morning and last week were spotted out having breakfast.

Cody has been linked to a string of high-profile stars over the years, including Miley Cyrus, Kylie Jenner, Gigi Hadid, Bella Thorne and Stella Hudgens.

It was revealed in January the pop star-turned-swimmer had split from Belgian-American model Marloes Stevens, 28.

Sources revealed Cody’s dedication to his swimming career ultimately took priority over his personal life, with Marloes also said to be homesick and missing LA.