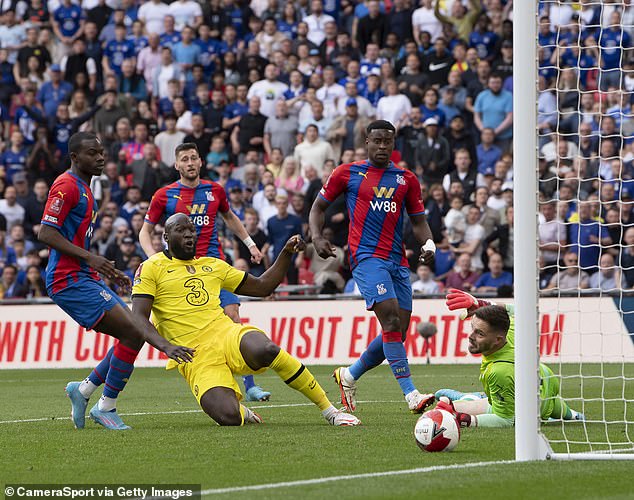 ‘His ability to miss sitters is STAGGERING’: Chelsea fans are left in disbelief at Romelu Lukaku after the £98m striker hit the post from TWO YARDS out against Crystal Palace… with some calling on the Blues to ‘sell him immediately’

By Liam Morgan For Mailonline

Fans on social media have slammed Romelu Lukuaku after he missed a sitter from two yards out in Chelsea‘s FA Cup semi-final victory over Crystal Palace at Wembley.

Lukaku came off the bench having not been chosen in the starting XI by Thomas Tuchel and had a glorious chance to put Chelsea 3-0 up.

Timo Werner pulled the ball back to the waiting Belgian striker, who slid his effort against the post with the goal at his mercy.

It was the latest disappointing moment in what has been a torrid season for the 28-year-old, who signed for Chelsea from Inter Milan for a whopping £97.5million last summer.

Fans were quick to criticise Lukaku for missing the ‘open goal’, with one Twitter user, @TefoWritesStuff, calling for the club to ‘sell him immediately’.

‘Lukaku couldn’t hit water if he fell out of a boat. His ability to miss sitters is staggering,’ wrote @MarkBurt5, while @CFCAzza97 said: ‘That about sums up Lukaku’s season, great start then missed an open goal.’

Another user, @KidMoth_, added: ‘When did lukaku’s finishing become this horrible? he’s missed so many sitters the past few games man.’

Fans tore into Lukaku on social media for his miss, which came when Chelsea led 2-0

Thomas Tuchel has not always been happy with his £97.5million striker this season

@hon_ags said the miss from Lukaku demonstrated why he has failed to nail down a regular place in Tuchel’s team. ‘This is why I’ll always choose Timo Werner over Lukaku, let him miss as many goals as possible, his contributions to the team is alone for me,’ they wrote.

Tuchel revealed prior to kick-off that despite his presence on the bench the striker’s fitness levels were not up to scratch to play from the start.

Lukaku’s return to Chelsea has not gone as successfully as it appeared it would when he netted twice in his first two games back at the club.

The Chelsea boss did not hide his frustration with the player after he gave an interview to Sky Italia at the end of last year saying that some of the German’s tactics left him unhappy.