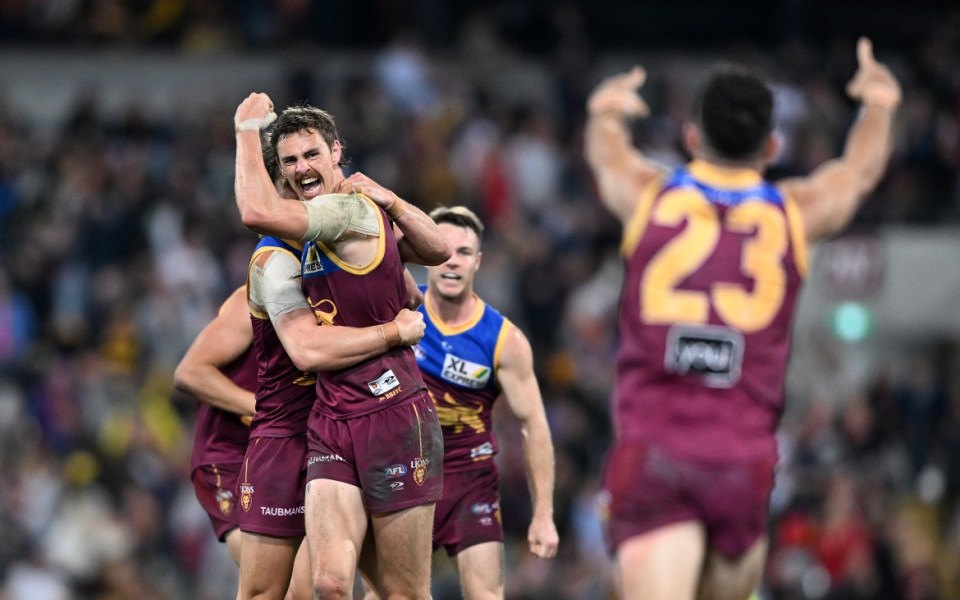 Brisbane has defied the loss of a ruckman and its horror AFL finals record to remain standing in an electric two-point AFL elimination final shootout defeat of Richmond.

In a game with 17 lead changes, Joe Daniher had the final say when a Richmond spoil landed at his feet and he soccered through the go-ahead goal with 64 seconds to play at the Gabba.

The 16.10 (106) to 16.8 (104) win means Brisbane will now play the loser between Sydney and Melbourne, while it’s curtains for Richmond, which had entered the finals in hot form.

Brisbane, which boasted a sorry 1-5 post-season record in the past three years, lost Oscar McInerney in the third minute to concussion while Dion Prestia (hamstring) was a costly loss for Richmond before half-time.

Tom Lynch, who had put Richmond 16 points clear in the third term before Brisbane rallied again, had a chance to seal it with two minutes to play but his set shot was reviewed to have missed.

Brisbane then shovelled the ball forward, Zac Bailey marking and sending the ball into the goalsquare.

Richmond’s spoil bounced directly into Daniher’s path, the lanky forward getting a boot to it for a two-point lead with just over a minute to go.

Lachie Neale (39 disposals, 21 contested possessions, 15 clearances) then made a crucial tackle to complete an incredible game and seal the ball in for the final seconds.

Fages summing up all our thoughts perfectly 😅

Hugh McCluggage was also impressive for the Lions while Dan McStay was a surprise performer when thrust into the ruck and Charlie Cameron’s (three goals) workrate was huge.

Jack Riewoldt kicked two goals from deep in the pocket in the final quarter to put his side back in front, while Marlion Pickett and Trent Cotchin were solid.

In his return from injury Dustin Martin had 15 touches and kicked a first-quarter goal.

Prestia was asserting his influence when subbed with a hamstring issue, 18-year-old Darcy Wilmot kicking truly on debut for Brisbane then Zac Bailey running into an open goal to give the Lions a seven point lead.

But, in just six kicks, Richmond scored the next three goals in a flash, Jack Ross’s effort pushing them 11 clear.

Relive the thrilling Last Two Minutes from the incredible opening game of the 2022 Toyota #AFLFinals Series now, thanks to Kennedy.#AFLLionsTigers pic.twitter.com/Bhz321XHqE

Down by 16, Cameron streaked into the goalsquare to offer Brisbane life before Deven Robertson and Daniher split Tyler Sonsie’s major to make it a five-point game at the break.

It was Cameron again just seconds into the final term, his snap pushing Brisbane ahead by one.

Both teams missed kickable set shots before McCarthy’s mark 25 metres out, directly in front of goal was denied for a push off the ball.

Daniel Rich was then pinged for running too far as Brisbane rebounded again.

Tom Lynch marked but, with two minutes to play, his goal was reversed on review as it sailed high over the upright.

It was the break Brisbane needed as, after two finals losses by less than a goal in the past three seasons, it got one to go its way.