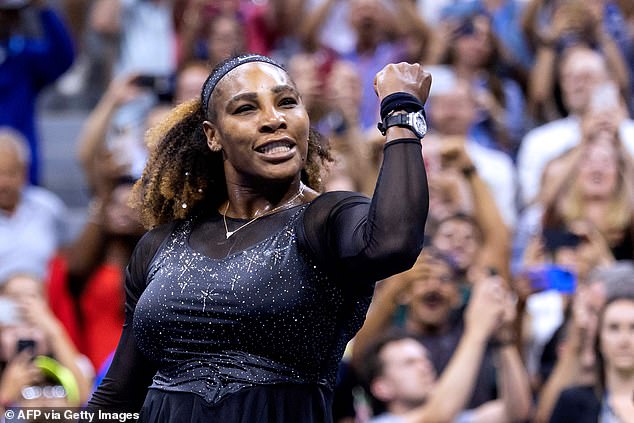 The hottest ticket in town! As Serena Williams keeps winning at the US Open, average third round prices prices rise by 221 PER CENT to around $600 to see one of the greats before she retires… with the best Arthur Ashe seats coming in at $6,500!

By Jake Nisse For Dailymail.Com

Serena Williams is not done just yet, and as the stakes are getting higher in the US Open, so too are the prices to watch her play.

Williams advanced to the third round on Wednesday by beating No. 2 seed Anett Kontaveit 7-6, 2-6, 6-2, and the ticket market is exploding as she continues her farewell tour.

According to data from TickPick, the ‘get-in’ price for Williams’ third round match Friday vs. Ajla Tomljanovic is $565, with the average ticket now costing $605.

That second figure is a staggering 221% more expensive than what the average third round ticket was going for – $188 – before she had advanced.

The Open is expected to be Williams’ last tournament of her career, and it wasn’t even clear if she’d make her way to the hard court after spending a year out of the sport.

But it was confirmed in July the six-time tournament champ would take her last crack at winning in New York, and ticket prices have shot up since.

Before it was announced that Williams would be playing in the tournament, a ticket could be had for as little as $52 for the third round.

Williams was met with a heartwarming mosaic after her first match

That’s 90% less expensive than the current ‘get-in’ price of $565 to watch her play in the next match.

The cheapest ticket in the lower level to see Williams play Friday is  4,361.

Williams has been serenaded with support throughout her first two matches, enjoying a home crowd atmosphere and drawing A-listers out to Flushing to watch her play.

Tiger Woods, Zendaya and Anna Wintour were among those watching her play Wednesday, and she was met with a heartwarming message at the conclusion of her first match earlier in the week.

Fans created a mosaic to say ‘We ♥ Serena,’ and Williams returned the sentiment after another win on Wednesday night.

‘It’s no rush here,’ she said of her impending retirement.