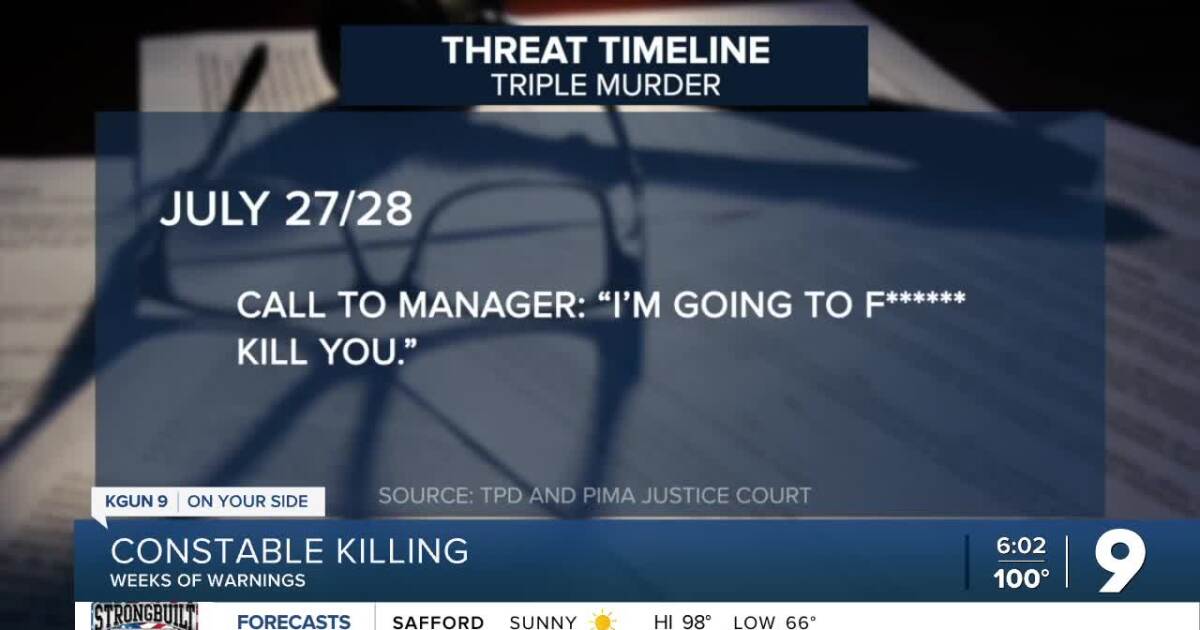 TUCSON, Ariz. (KGUN) — The man who police say killed a Constable, apartment manager and a man at the apartments had been making threats weeks before the shootings.

That’s revealed in police reports obtained by KGUN9 On Your Side.

When did authorities see signs Gavin Lee Stansell could be a threat? That’s the persistent question in the deaths of Constable Deborah Martinez Garibay, apartment manager Angela Fox and Elijah Miranda. They were shot and killed in late August. Police reports that claim Stansell was making threats in early June.

Last Thursday a funeral honored the life and service of Constable Deborah Martinez Garibay. She was shot and killed a week before as she and apartment manager Angela Fox came to evict Gavin Lee Stansell. Police say Stansell went through the wall into an adjoining apartment and shot and killed Elijah Miranda there.

Kathy Marchetti Castillo is the former manager at the apartments. She says, “Since probably the first part of June some of the neighbors had complained and finally I had to get involved because I saw Gavin Lee Stansell on camera and loading and unloading his gun at the playground. So on July 27, I called the police.”

One report says he threatened a neighbor over cutting his toenails outside and said “He was going to make (that man)—— eat them.”

That report says, “Weapons not seen.”

A police timeline says between June 10th and 16th officers made four attempts to reach Stancell by phone and in person and did not connect. They say they broadcast an advisory that any officer who sees Gavin Stansell should stop and interview him.

Apartment residents told police “…Gavin is a constant issue and says that Gavin would open his door and “cock his gun”.

An officer says Kathy Castillo, who was still manager at the time found Stansell’s phone was disconnected but was able to email him.

A report from July 28th says she told police she got a call from a man who said he was responding to an email, and said, “I’m going to f****** kill you.” And said she heard the sound of the caller cocking a gun.

Police say they heard the recording but when they tried to get a copy they found Castillo had been fired as manager and they were unable to reach her after that.

The report says Castillo told police she did not see a gun but she says very firmly that on surveillance video she did see him with a gun near the apartment playground.

Court documents show on August 2nd attorneys for the apartments filed a notice of intent to evict Gavin Lee Stansell based on a history of threats and intimidation.

It appears he was not served with that notice until August 16th.

The case moved to a court hearing August 22nd. A court order issued that day says the eviction was due to threatening a resident with a gun.