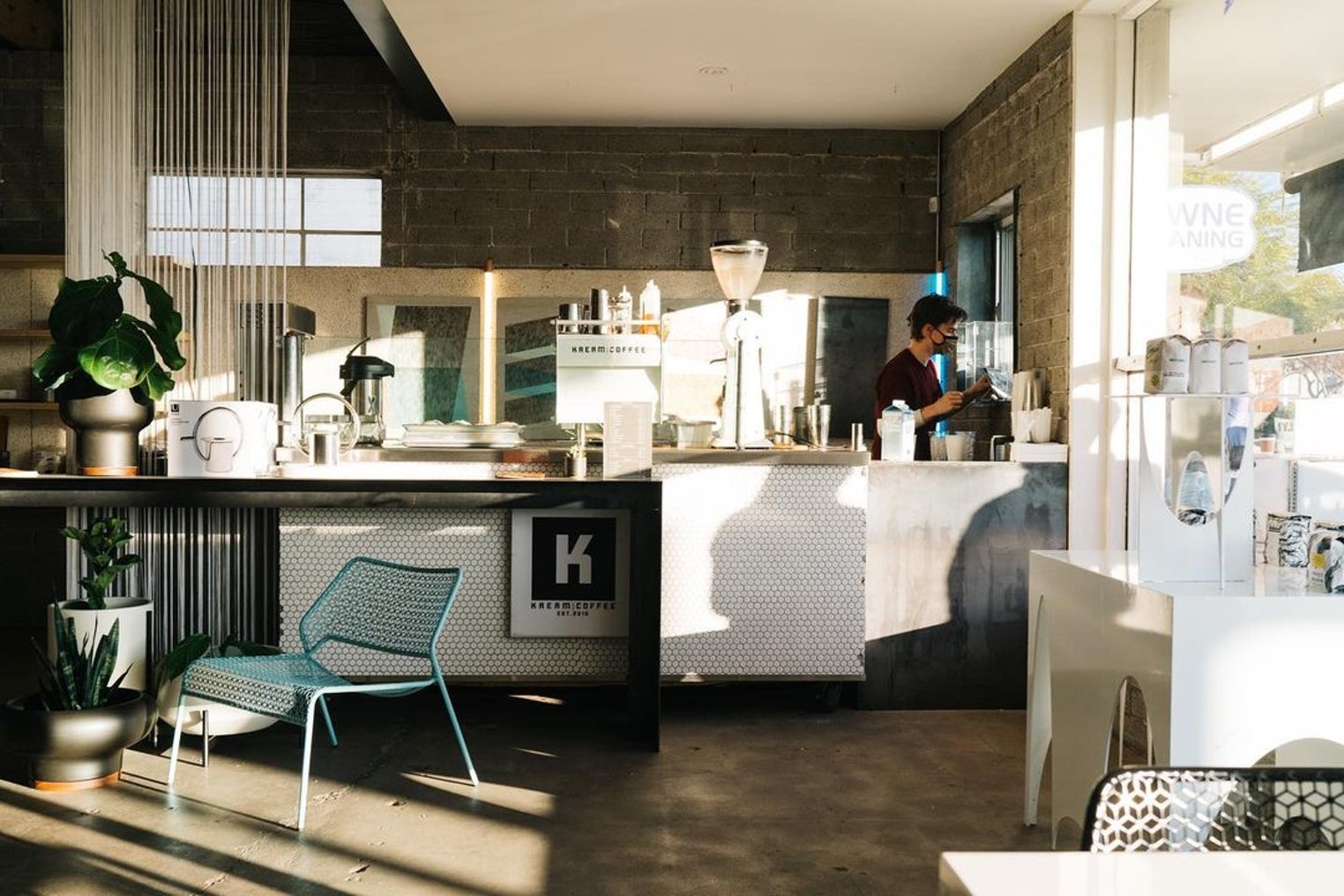 At an uptown Phoenix furniture store and cafe, customers sit for hours sipping coffee while they catch up with friends, read architectural books, work, develop a business plan, or chat with the barista.

Soon, those customers will be able to visit For The People and Kream Coffee’s sister concept on Roosevelt Row. It will offer the modern home design elements of the current location along with an expanded coffee bar and market.

Calling it a “2.0 version” of their current store, partners Chad Campbell and Shawn Silberblatt plan to unveil Dialog in September.

The word “store” doesn’t quite convey what Silberblatt and Campbell have been doing or plan to do, however. The For The People and Kream Coffee dual concept is also a community space and they hope Dialog will offer the same — and more.

“We were very intentional with the name,” Campbell says. “We really want to create conversations.”

All of the products, including the coffee, will be individual at each space. But everything will have the same eye on aesthetics and quality, from the official Taschen library to Japanese preserves.

Acclaimed architect Wendell Burnette designed the space, which Campbell says will be “modular and simple, but beautiful and elegant.”

Dialog will have a U-shaped black coffee bar, gleaming white floors, and a minimalist interior that can transform from a “garden coffeeshop” during the day to an event space in the evening showcasing art, food, and drinks.

Dialog will be in a prominent ground-floor suite at 1001 North Central Avenue. The coffee bar will offer seating throughout the space and in the atrium.

The cafe component will feature a wider selection of pastries than Kream has, along with a variety of roasters from all over the U.S. and Mexico.

“We only curate roasters that are doing that third wave movement, roasting coffee with the intention of bringing out the flavor of that particular crop,” Silberblatt says.

The house roaster at Kream Coffee is Sweet Bloom Coffee from the Denver area. Dialog will use Stereoscope Coffee out of Los Angeles.

“Other shops are using large blends of beans from various regions,” Silberblatt adds. “They’re never going to give you that ability to talk about the harvest of the bean.”

Sweeteners are similarly refined, including organic vanilla and honey.

“We aren’t a coffee shop where you can order whipped cream,” Campbell says.

The lineup includes “anything from a small, curated grab-and-go lunch to building a charcuterie board,” Silberblatt explains. “Crackers, fresh breads, canned goods, preserves. Even some chocolates and candies, but curated in an awesome way.”

He adds, “We’ll have some of the best of the best from all over the world,” whether that’s olives from Italy or locally made hummus. A drinks cooler will hold kombucha, bottled water, and “sparkling beverages that are sophisticated enough to use as a mocktail,” Silberblatt says. Dialog won’t sell alcohol.

Campbell and Silberblatt are partners in life as well as business who, when they first met, used to collect vintage furniture. They eventually became part owners of a vintage store and then bought For The People when it was a 500-square-foot space at Biltmore Fashion Park.

At that time, Royal Coffee was next door. The owner, Hayes McNeil, is now the principal of Plus Minus Studio and the builder for Dialog. Silberblatt calls him and Burnette their “organic dream team.”

After moving For The People to its current location on Central Avenue, Campbell and Silberblatt added Kream Coffee. They noticed people would stay and linger with their morning caffeine, so the store morphed easily into a community space.

“One thing we have really learned by bringing a coffee shop into a retail store is the connection you have with customers,” Silberblatt says.

Campbell adds, “It’s so much more than food and beverage. It’s about relationships.”