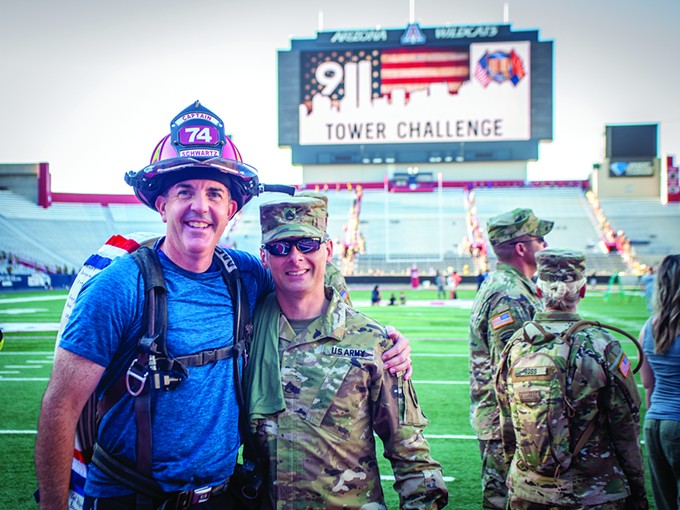 First responders and the military honor the fallen at the 911 Never Forgotten Tower Challenge.

On the anniversary of the terrorist attacks, the group hosts the 911 Never Forgotten Tower Challenge, a 2,071-step climb that represents the 110 floors of the Twin Towers.

Anyone climbing the stairs must be 16 or older. The concourse walk is also available for all participants during the event and younger children.

The first 911 Tower Challenge was held in 2011. Since then, it has grown to include over 4,000 participants. Police, military, firefighters and other first responders attend and often wear full gear.

During the climb, participants see the photos and names of those who lost their lives that day.

“The attack on Sept. 11 was the Pearl Harbor of our generation,” said Ben Buehler-Garcia, vice president of the 911 Tower Challenge Foundation.

He hasn’t served in the military or worked as a first responder, so he said he feels it’s his duty as a civilian to support those who have.

“When you talk to someone from World War II, all of them remember Pearl Harbor. When the 20th anniversary of 911 hit, it struck me that it might be fading from people’s memories. I think we, as a society, should never forget that.”

Buehler-Garcia said most people enlisting into the military now were not yet born or do not remember the Sept. 11 attacks.

To help bring awareness, the Tower Challenge opening ceremony features new recruits taking their oath of enlistment. The goal is to make the ceremony meaningful while also helping people remember those lost in the attacks so they do not fade away.

The registration fee is $50, and all proceeds go to benefit the event’s selected charity beneficiaries. The 2022 beneficiaries are the 100 Club of Arizona and Basecamp for Veterans Inc.

The Arizona 100 Club supports statewide law enforcement, first responders and other emergency services that support city, country, state, federal and tribal communities. Basecamp for Veterans Inc. is an immersive equine therapy program for veterans and their families using rescued mustangs. Participants receive mentoring and continued therapy. All of this is provided at no cost to the veteran.

The 911 Tower Challenge Foundation has donated more than $320,000 to charities serving law enforcement, first responders, military personnel and their families.

The group also is hosting a pre-event dinner at Site 17 Event Center, 840 E. 17th Street, from 5:30 to 8:30 p.m. Friday, Sept. 9, with speaker Tim Brown, a retired and decorated 20-year New York City firefighter who won a Peabody award for his documentary, “Rebirth.”

He survived the Sept. 11 attacks, but lost 93 friends overall, including his two best friends. He also responded to the 1993 World Trade Center Bombing and was dispatched in 1995 to assist with rescue operations in the Oklahoma City bombing at the Alfred P. Murrah Federal Building.

Robert Brandt helped found the 911 Tower Challenge Foundation in 2011 when the 10th anniversary was approaching. Working at the Tucson Police Department, Brandt said he was disappointed that Sept. 11 remembrances were falling by the wayside.

They came up with the idea of doing what would become the first 911 Tower Challenge.

“When we set up the first 911 Tower Challenge, it had about 100 participants and imagined it as a one-time thing,” Brandt said. “The feedback we got from everyone was it was great, and we should continue to do it. Eleven years later it’s grown from 100 participants to last year over 4,000 statewide. We have people all over the country and even the world participating.”

Brandt said everyone should take a few minutes every Sept. 11 to remember those who were lost. He also hopes, especially with the current climate of the country, it will remind Americans how to come together in times of difficulty.