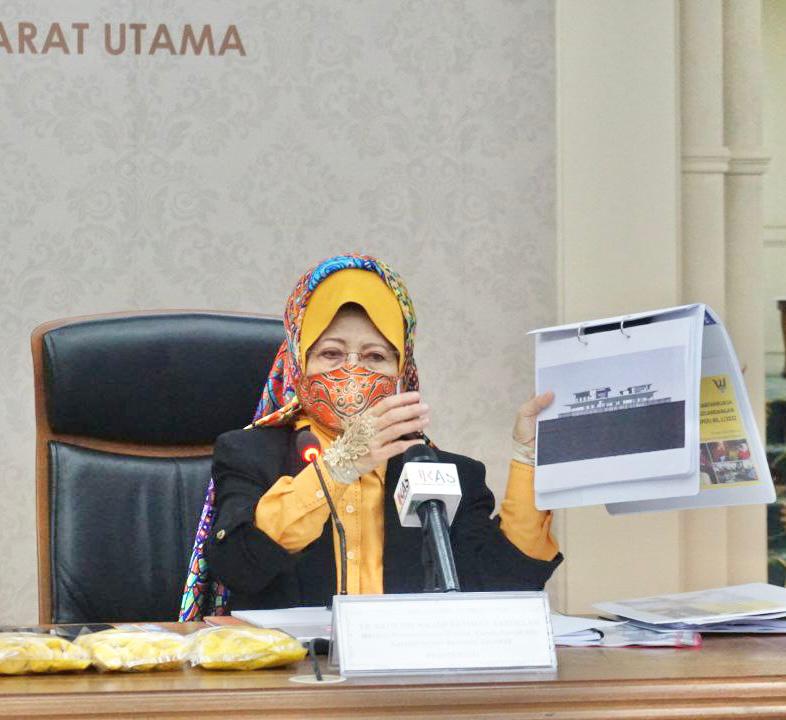 Fatimah emphasises a point during the press conference.

She said a TTG had already been set up in Sibu under the 12th Malaysia Plan last year and it was frequently visited by non-governmental organisations, education institutions and the public to reach out to the homeless to render assistance to them.

“At TTG, we provide counselling service and trainings for the homeless to be able to generate income.

“However, we do not accept those with mental illness at the centre,” she told a press conference after chairing a Sarawak Homeless Management Committee meeting at Wisma Bapa Malaysia here yesterday.

She said homeless individuals who suffered from mental illnesses would be referred to the hospital for further action after being rescued from the street.

Fatimah pointed out that TTGs in Miri and Kuching will be established as a corporate social responsibility project of companies from the private sector, while TTG Bintulu will be set up together with a community social support centre via funds allocated under 12th Malaysia Plan.

She expected the three projects to start in the third quarter of this year.

On the homeless situation in Sarawak, Fatimah said 124 out of the 158 homeless individuals rescued had been vaccinated against Covid-19 during an integrated programme with government agencies in 2021.

For 2020, a total of 145 homeless individuals were rescued, she added.

“The figure has made Sarawak the top-three places in Malaysia with the highest number of homeless individuals being rescued.”

A total of 83 homeless individuals were placed at temporary shelters in Sri Aman, Sarikei, Sibu, Bintulu, Miri and Limbang under the social intervention support programme.

In a statement shared with the press later, Fatimah’s ministry said 224 integrated operations were conducted between 2016 and 2020, in which 513 homeless individuals were rescued from the streets.

It also said 237 homeless individuals’ profiles were recorded by the Social Welfare Department and Social Development Council in 2020, comprising 194 males and 43 females.

A total of 158 homeless individuals’ profiles were recorded in 2021, comprising 148 males and 10 females.

Fatimah said the top reasons for homelessness were family problems that constituted 38 per cent, mental health issues (33 per cent), no place to stay (12 per cent), substance and alcohol abuse (10 per cent) and retrenchment (five per cent).

Touching on sexual harassment and violence, the minister said the community should sympathise and support victims instead of stigmatising them, including those involving male victims.

She said there were many victims who refused to come forward to lodge police reports due to fear of embarrassment, and the perpetrators were allowed to escape with any consequences.

Fatimah also announced that her deputy minister Mohamad Razi Sitam had been appointed to the committee, and she thanked Datuk Francis Harden for all the hard work during his term in the committee.

Harden, who was Fatimah’s assistant minister in the previous state Cabinet, is now Deputy Minister of Education, Innovation and Talent Development.